This year I've been tasked with bringing some of the 'Best of British' to our readers, be it people or places, and to kick off the series let me introduce you to Eric Brown.

You may not have heard of Eric but you’d have to go a long way to find a more remarkable Brit than Eric “Winkle” Brown.

Eric’s story fascinates me, because my own Dad launched jets from Royal Navy aircraft carriers, and when he later went on to get a pilots licence, we enjoyed many enjoyable (and sometimes scary) hours in the air with him!

Here are 20 fantastic facts we’ve ‘winkled out’ about Eric.

1  He went up for his first ‘spin’at the 1936 Berlin Olympics with Ernst Udet, a charismatic WW1 fighter ace, who told him he "had the temperament of a fighter pilot" and advised him to learn German. In 1937 Eric went to Edinburgh University to study Modern Languages and German…and took his first flying lesson.

2  In September 1939, while an exchange student in Germany, he was arrested by the SS who escorted him to the Swiss border. Once back home he immediately signed up as a Fleet Air Arm pilot serving on the escort carrier HMS Audacity. During this time he shot down two Focke-Wulf "Condor" planes.

3  When his ship was torpedoed in November 1941, Eric was left roped together with 23 survivors in the icy water. Only two of them made it through the night.

4  Eric made around 1,500 landings on 22 different carriers by the end of 1943 while at Farnborough as Chief Naval Test Pilot.  One of these was landing a twin engine Mosquito for the first time on an aircraft carrier. An amazing feat as the fastest recommended speed for deck landing of an aircraft was 86 knots, while the stall speed of the Mosquito was 110 knots!

6  He helped develop a system that could destroy the V1 “doodlebug” rockets that terrorized London in the latter stages of the war. His home had already been destroyed by a V1 Flying Bomb. ‘My wife was injured, our cleaning lady lost an eye and the dogs disappeared, so my interest was personal,’ he said.

7  Eric’s work as a wartime test pilot meant that he undertook some of the most dangerous jobs around and all in all he survived 11 crashes in his career, including bailing out of a burning plane over the English Channel. He was involved in diving aircraft at high speeds and during one test reached Mach 0.96 in a modified Spitfire!

8  In 1944, he was awarded an OBE but when Eric arrived at Buckingham Palace at the age of 28 for the fourth time, to receive the AFC in addition to the DSC, MBE and that OBE, George VI greeted him with the words: 'Not you again'. In fact, Eric had to go back once more to receive the King’s Commendation for Brave Conduct.Years later he would add a CBE to his collection.

9  His German skills were particularly valuable as Commanding Officer of "Enemy Aircraft Flight” whose aim was to acquire German technology and aircraft before being destroyed or taken by the Russians.

10  When asked to help interrogate the former camp commandant Josef Kramer and his assistant Irma Grese at the Bergen-Belsen concentration camp, Eric remarked: "Two more loathsome creatures it is hard to imagine". He described Grese as "the worst human being I have ever met." Eric interviewed many Germans after World War II, including Wernher von Braun, Hermann Göring, Willy Messerschmitt and Ernst Heinkel.

11  After the war Eric test-flew 53 captured German aircraftincluding the infamously unstable (deemed to be almost suicidal due to the notoriously dangerous propellants) Me 163 rocket fighter as well as theMe 262 jet fighter,which he described as the best plane of the war, very much superior to anything in the air at that time.

12  A natural extension of this work meant that he became involved in a supersonic project, test flying a Spitfire and diving from high altitudes to achieve subsonic speeds. The information gleaned from this work allowed American Chuck Yeager to become the first man to exceed Mach 1 in 1947.

13  In 1946 Eric test flew a de Havilland 108 after a crash in a similar aircraft had killed his colleague and friend Geoffrey de Havilland. Eric was shocked to discover that in a steep dive the aircraft suffered from a terrible oscillation.He somehow used all of his considerable experience to recover it and believed that he survived the flight partly because he was a shorter man, with the taller de Havilland having broken his neck due to the violent oscillation.

14  And in yet another near fatal incident in 1949, while testing jet-powered flying-boat prototypes, he hit submerged debris, and his plane started sinking near the Isle of Wight. He was fortunately pulled unconscious from the cockpit of his wrecked aircraft by a fellow test pilot.

15  In the 1950’s during the Korean War, Eric flew a number of American aircraft, including 36 types of helicopter.

16  In 1952 he demonstrated a steam catapult to the Americans. It had been planned for him to make the first launch with the ship steaming into wind, assisting lift, however the wind on the day was so slight that British officials decided that they would risk their pilot (that’s Eric) if the Americans would risk their aircraft!  Fortunately, the launch was a success!

17  In 1957 Eric led the re-emergence of naval aviation in Germany so successfully that in 1960 German squadrons were integrated into NATO.

18  Ironically, while in Germany Eric also spent 3 months as a test pilot for Focke-Wulf, helping them out as the previous pilot had been detained due to having relatives in East Germany. As you’ll recall he had shot 2 of them down earlier on in his career…

19  Eric finally retired from the Royal Navy in 1970 and his last (and sad) flight as a pilot was in 1994. Since 2013 he’s lived in semi-retirement in West Sussex and in June 2014 was the subject of a BBC documentary called Britain's Greatest Pilot: The Extraordinary Story of Captain Winkle Brown. Now aged 95, he still enjoys driving and has just bought himself a new sports car.

20  Eric’s affectionate nickname "Winkle" is short for "Periwinkle", a small mollusc, the name given to him because of his short stature. In every other way he is a monumental British hero. 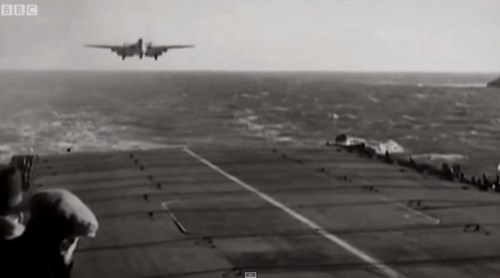 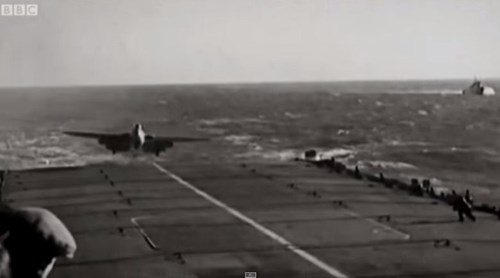 If all this talk of aviation has whetted your appetite to learn more, then the best place to start might be Farnborough, a famous flying town where Eric worked for a long time and which still has strong links to the aviation industry, with the Farnborough Air Show wowing the crowds every two years.

Prestige Apartments has a wide range of serviced apartments and vacation rentals on offer in Farnborough.  We’ll have something to suit all budgets and group sizes so chocks away and book your Farborough serviced apartment base. Just get in touch with our friendly sales team and they’ll help you to choose your perfect high flying serviced  apartment.