Portsmouth's rich naval history is the stuff of legend, and is synonymous with the great Admiral Horatio Nelson, as well as many other great historical figures who have sailed from this world famous port. So for lovers of naval history Portsmouth is obviously the ultimate destination, with the amazing Historic Dockyard being one of the UK's most awe inspiring attractions, but even if you're not a history buff there is still an incredible amount to see and do in this beautiful and revitalised waterfront city.

Portsmouth is the second largest city in the ceremonial county of Hampshire on the south coast of England. The waterfront area and Portsmouth Harbour is dominated by the new Spinnaker Tower, a 560 feet (170 m) landmark which currently stands as the United Kingdom's eleventh tallest structure as well as the tallest outside London. There is however, a lot more to modern day Portsmouth than that, including a wonderful, large and popular common right on the Southsea seafront where one can play tennis, bowls, go running along the promenade, throw frisbees for the dogs and a host of other outdoor activities!

For families in particular Portsmouth has so much to offer, with its lovely beaches and walks, the Bluereef Aquarium, the constantly active harbour with hovercraft and ferries and sailing boats, traditional funfairs and piers, great waterside pubs and restaurants, superb shopping...the list really does go on and on.   The city can be best accessed by staying at the desirable and well located serviced apartments of The Crescent Apartments, which offers both 1 bedroom and 2 bedroom apartments.

Southsea is an area of "Pompey" that simply has to be explored at leisure, and even after you've toured the famous Castle there's still all the quirky shops of Albert Street to discover, before you can think about a pie and a pint!  The resident funfair and arcades are well done and the nightlife is legendary. Portsmouthians really like going out too, which would account for the record number of pubs per capita in the area!

Portsmouth has a rich literary history too and Charles Dickens' Birthplace has had many a literary giant pass through it, but as we've mentioned before it's a lively, vibrant city and there are always a plethora of events during the summer to keep you entertained.

So whether you're desperate to go back in time on board Admiral Lord Nelson's HMS Victory or see Henry XIII'S flagship the Mary Rose or the famous HMS Warrior and the rest of Portsmouth's brilliant naval attractions, take in the amazing views from Spinnaker Tower, or simply shop til you drop in new Gunwharf Quays waterside village, you're sure to love Pompey!

What to do in Portsmouth

Listed below are some of the great places to visit in Portsmouth. Click one to find out more.

Spinnaker Tower - Personal favourite of ours!! 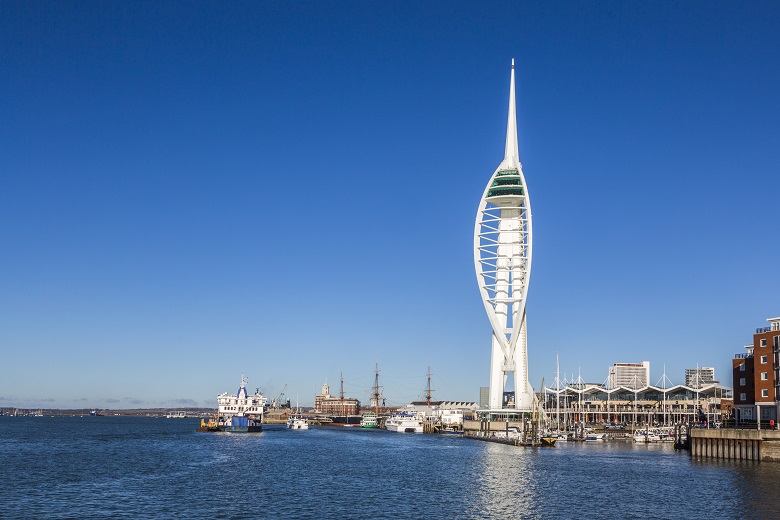 Read all about our visit here

The 170 meter tall Spinnaker Tower is the superb centrepiece of newly revitalized Portsmouth Harbour, dramatically overlooking the Harbour, Gunwharf Quays, the Historic Dockyard and the city centre as well as all of Portsmouth's nearby towns and suburbs.

Stretching for up to 23 miles in any direction, the panoramic views from the top of the Spinnaker Tower are truly breathtaking taking in the sandy beaches of the Witterings and Selsey Bill in the East to the countryside of the New Forest in the West, from the picturesque Isle of Wight in the South to the rolling hills of Hampshire's South Downs in the North.

Walk across the Sky Walk, the large glass floor 100 metres above sea level,with a glass thickness of 60mm which can hold a total weight of 288 stone.
So why not test your bravery by daring to cross the glass floor...while looking down!

Awesome, amazing and inspiring. Portsmouth's big guns are brought to bear on her unsuspecting tourists in the form of the Victory, The Warrior and the Mary Rose, who are about to deliver a broadside of such historical power as to render them speechless for hours to come.

The power and scale of the history on offer carries sensationally on with Action Stations and Dockyard Apprentice, continuing with explorations from the time of Henry VIII through Victory at Trafalgar and the D-Day landings to the Royal Navy's present day activities - all brought vividly to life for you. 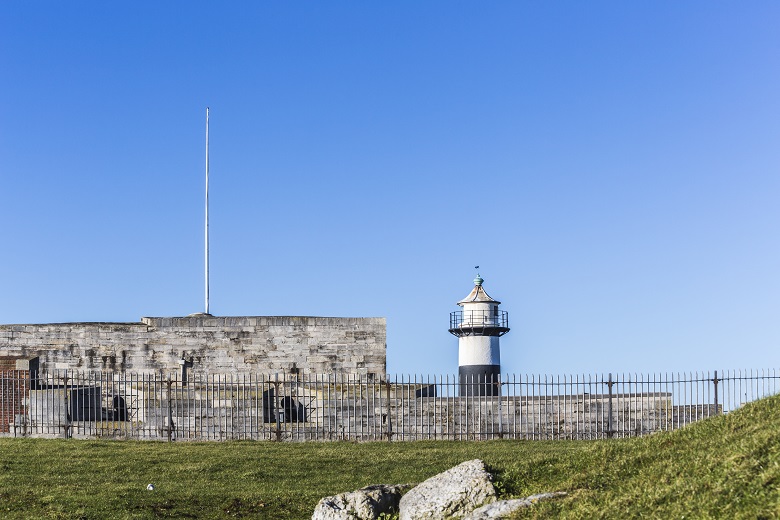 Southsea Castle was only just completed when Henry VIII's flagship, the Mary Rose, tragically sank in front of the Castle in 1545 killing 500 of its crew. And it was during the English Civil War nearly 100 years later, that the Castle was captured for the only time in its history by Parliamentarian forces.

Over the centuries, Southsea Castle's defences were strengthened so that it could continue to protect Portsmouth. In the 19th Century a tunnel was built to defend the Castle moat. Visitors can still enter the tunnel and see how the Castle would have been defended against invaders. Artillery, gun platforms and panoramic views from the top of the keep to the Isle of Wight and Solent make this attraction a must-see!

Charles Dickens - Portsmouth's most famous son, whose writing has touched the lives of millions and greatly inluenced the works of some of Britain's most famous writers from Sir Arthur Conan Doyle to H.G. Wells was born at 1 Mile End Terrace in Portsmouth on 7th February 1812.

This novelist, journalist, and social commentator's early life was spent in Portsmouth and its here where you can experience the authentic atmosphere of the comfortable Regency home which would have greeted the new-born Dickens.

Much of Victorian Portsmouth still remains in the city's streets and heritage, drawn upon by Dickens himself in Nicholas Nickleby. The Charles Dickens Birthplace Museum is the perfect place to start exploring and experiencing the work of one of England's most famous and best-loved writers. 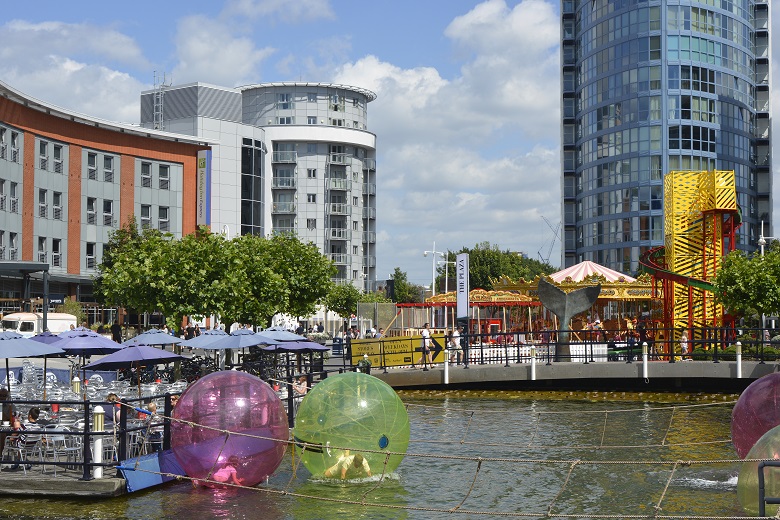 After having been awed by the magnificence and heroism of Nelson and The Victory, you may need a shift in emphasis and a bit of retail therapy could be the answer.

Portsmouth's Commercial Road is great for shopping but at the new Gunwharf Quays shopping centre you can shop at over 95 designer outlets, eat at one of 30 cosmopolitan bars and restaurants, and then work it all off again at the health and fitness centre! Or why not be entertained at the 14-screen Vue cinema, with bowling at the 26-lane Bowlplex before enjoying a night out at Highlight, dancing the night away...

Once you've experienced shopping in the pedestrian avenues, relaxing in the wide open spaces, seen the spectacular views back across Portsmouth Harbour, and enjoyed the vibrant atmosphere, you'll be drawn back to Gunwharf Quays again and again. Make sure not to lose the credit cards on the beach!

Our featured apartments in Portsmouth