Glasgow grew from a small rural settlement on the River Clyde to become the largest seaport in Britain. Expanding from the medieval royal burgh, and the later establishment of the University of Glasgow in the 15th century, it became a major centre of the Scottish Enlightenment in the 18th century. From the 18th century the city also grew as one of Great Britain's main hubs of transatlantic trade with North America and the West Indies.

With the onset of the Industrial Revolution, the population and economy of Glasgow and the surrounding region expanded rapidly to become one of the world's pre-eminent centres of chemicals, textiles and engineering; most notably in the shipbuilding and marine engineering industry, which produced many innovative and famous vessels. Glasgow became the "Second City of the British Empire" for much of the Victorian era and Edwardian period.

Glasgow is Scotland's largest city and is renowned for its culture, style and the friendliness of its people. It offers a blend of internationally acclaimed museums and galleries, stunning architecture, vibrant nightlife, fantastic shopping and a diverse array of restaurants and bars.

Glasgow was European City of Culture in 1990 and the City of Culture tag has allowed Glasgow to showcase many of the facilities created by the city's Victorian philanthropists. Prime among these are the magnificent Kelvingrove Museum and Art Gallery housing the richest and most visited municipal art collection in the UK outside of London; the splendid Glasgow Museum of Transport and the marvellous Mitchell Library, the largest free public reference library in Europe. The serviced apartments at Lynedoch Apartments close to Kelvingrove would make an ideal base for exploring the city.

The City Chambers is Glasgow's jewel, a spectacular building which holds the largest marble staircase in the world. The second largest is in the Vatican at a mere 2 and a half stories while Glasgow's has 3! The building itself is an absolute marvel, all of the marble having been imported from Italy during a period in which Glasgow was a prosperous industrial center, and it certainly shows in the ornate architecture. Fraser Suites Glasgow are centrally located at the heart of Merchant City and one of their serviced apartments could be the perfect place to stay if discovering Glasgow's artistic treasures is high up on your must-do list.

The Mackintosh House is the beautiful home of Charles Rennie Mackintosh, the turn-of-the-century Scottish architect and artist who brought international fame to the city of Glasgow, and it's an absolute must-see. The Spires Glasgow with its many one and two bedroomed serviced apartments would certainly be a fitting base from which to explore the collection.

The priceless Burrell Collection is housed in a magnificent, purpose-built gallery which was constructed in beautiful Pollok Park to house millionaire shipowner Sir William Burrell's stunning and extensive collection of some 9,000 artefacts which he and and his wife, Constance, donated to the city in 1944.

Anyone wishing to enjoy their stay in Glasgow will enjoy the central location of Cochrane Street Apartments  located in the heart of the vibrant Merchant City near to George Square and with shopping facilities with Buchanan and Argyle Street just 2 minutes' walk away. In addition Glasgow's theatres, museums and exciting galleries are nearby to the apartments.

Once you've had your fill of art and architecture, Glengoyne Distillery, perhaps Scotland's most beautiful distillery, with its daily guided tours and whiskey tastings, might be just the tonic!  Just a short drive from Glasgow, Stirling and Loch Lomond, this traditional distillery has been flourishing since 1833. Glengoyne's range of  tours includes the legendary Master Blender tour where guests create their very own individual whiskey to take home.

Glasgow is home also, of course, to the famous and intense footballing rivalry between Glasgow Rangers and Celtic FC so if like sporting endeavour, make your way to Celtic Park to sample the unique intensity and atmosphere that only a Derby match can bring.  If golf is more your bag then you're well placed for a host of great golf courses, being close to the legendary Turnberry, Royal Troon and Old Prestwick courses.

The Ubiquitous Chip
It’s dining that really puts the Chip on the map, and for which it’s recommended above all else. It was one of the first places in Scotland to champion contemporary Scottish cuisine, and in many respects remains the last word on the subject. The brasserie upstairs is very good, serving specialities such as olive oil poached salmon and slow-cooked Inverurie lamb shoulder at solid value for money. If you feel like splashing out, go the whole hog and eat at the main restaurant, situated on the ground floor in the wonderfully ambient courtyard, where you dine amid ponds and greenery.

The Hanoi Bike Shop
This canteen-style Vietnamese restaurant (Glasgow’s first) is where pho noodles, curries and imported beers are all excellent. Prawn crackers with more-ish peanut butter dip are a must-try to get you started, likewise the summer rolls – cold rice paper parcels packed with prawn, omelette, mint, coriander and noodles, for dunking in a sweet chilli dip. Pho noodle broths in chicken, beef, pork, seafood and tofu varieties make up the majority of the hot options, and are all wonderfully flavoursome. ‘From the pot’ specials can include cari-spiced coconut and coriander curry or black pepper pig’s cheeks with lemongrass pork fritter, seasonal greens and roast peanuts.

The 78
A vegan café-bar known for its craft brews, DJ sets and incredibly generous pricing strategy, standouts from the main lunchtime and evening menus include quesadillas with refried beans and the classic 78 veggie burger served with homemade chutney and salad, and ever-changing speciality falafels. The beer selection is extensive, with plenty of Williams Bros, Sam Smiths, Black Isle and other brews both on tap and in the fridge.

Nanakusa
Authentic Japanese cooking techniques and ingredients are mixed with locally sourced veg, meat and poultry and a few Scottish cooking traditions, to best-of-both-worlds effect. There are no shortage of deep-fried things among the starters, from king prawns to octopus and aubergine – Nanakusa clearly knows its clientele. Chicken, seafood or yazai gyoza dumplings are served with a wonderfully more-ish dipping sauce, which goes well with all kinds of other things on the menu if you fancy mixing and matching a bit.

Dakhin
A southern Indian restaurant that’s a cut above your average Glasgow curry house. Southern Indian cuisine places an emphasis on mild, subtle flavours and the common blights of oil, grease and garish colourings are eschewed in favour of rice, coconut, and lentil-based dishes, prepared with liberal doses of coconut milk, resulting in a more forgiving digestive experience.

There are chicken, lamb and vegetarian options aplenty, with several regional specialities to choose from, based around each core ingredient. The house signature dish is undoubtedly the dosa: a large rolled crêpe made from finely ground rice and lentils, stuffed with fillings of your choice and cooked on a griddle.

What to do in Glasgow

Listed below are some of the great places to visit in Glasgow. Click one to find out more. 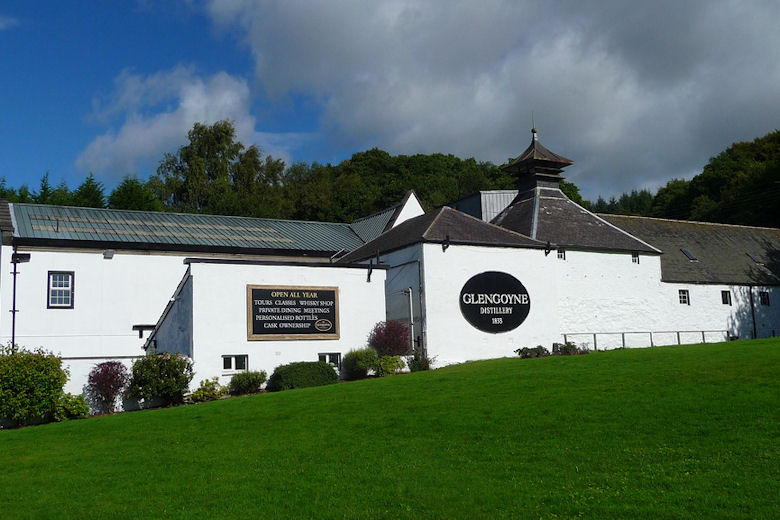 Glengoyne - reputed to be Scotland's most beautiful distillery - is within easy reach from Glasgow, Loch Lomond and Edinburgh, and is open all year round offering in-depth and educational tours!

Glengoyne is now offering a fantastic range of guided tours that take you behind the scenes at the distillery and give you an amazing insight into the production of scotch whisky.  From the basic Glengoyne tour where you can warm your cockles with a dram of Glengoyne 10 year old Highland Single Malt Whisky overlooking the waterfall and glen and view a unique film before being whisked off to discover the secrets of Scotland's slowest whisky distillation at this stunning, quirky wee gem of a place; through to the Master Blender Session where you can create your own blend of Whiskey or the decadent Century of whiskey - a tutored tasting of the company's oldest and rarest whiskies, the breathtaking Glengoyne 40 year old and Isle of Skye 50 year old in their own bespoke crystal 'copita' glasses, which you will take home with you. 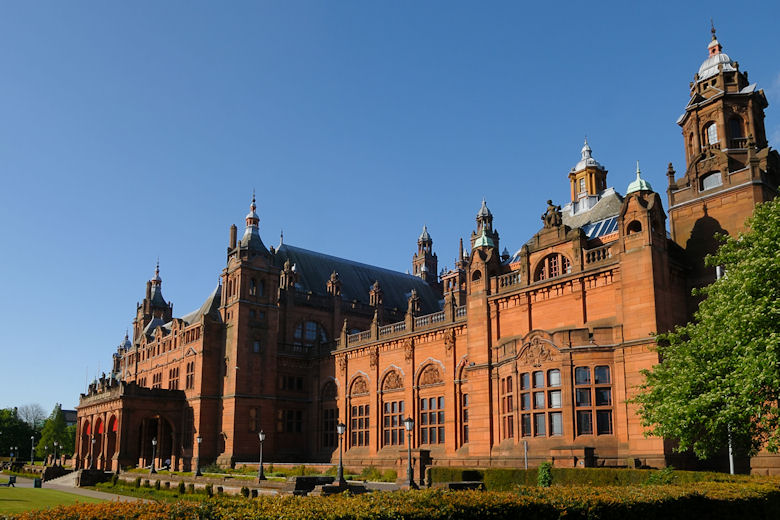 Located in the West End of Glasgow the Kelvingrove has 22 themed, state-of-the-art galleries displaying an astonishing 8000 objects.

The collections are extensive, wide-ranging and internationally-significant and include natural history, arms and armour, art from many art movements and periods of history, and much more.  They even have a real Spitfire! 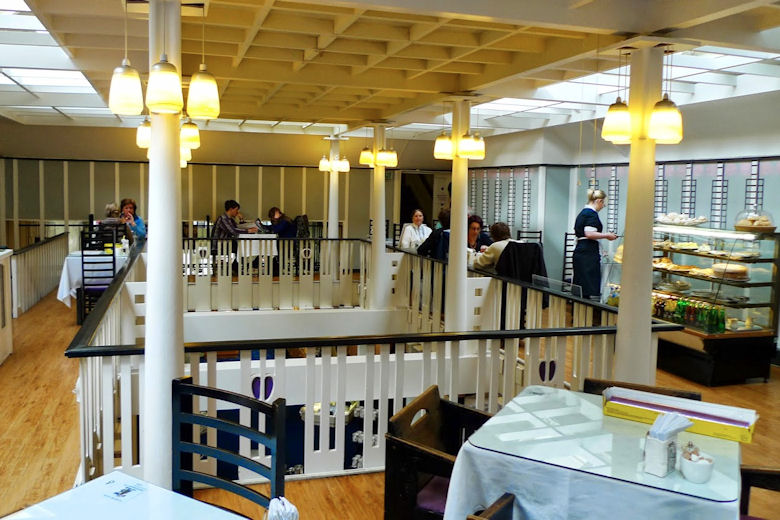 The Willow was the only tea room building where Mackintosh had complete control over every aspect of the design. He modelled the exterior as well as the interior of the building and even designed the tea spoons and waitresses' dresses.  The Willow name comes from Sauchiehall, the street where it is situated, which in Scottish Gaelic means alley of the willows and the theme of willows featured throughout the building.

The Willow remains open today to welcome visitors keen to experience the splendour of a bygone era and take tea just as they did in the same rooms and interiors 100 years ago. 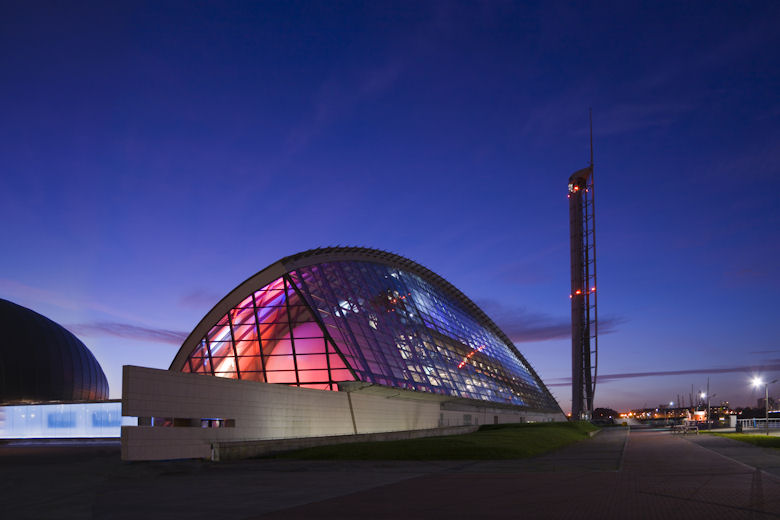 At the Riverside Museum, the new Museum of Transport, there are over 3,000 objects on display, compared with 1,300 objects previously. These include some old favourites along with some new exhibits to the Collection. One of the new exhibits is the recently acquired South African locomotive, Glasgow Museums' largest object.

Visitors can climb aboard some of the exhibits to get a real feel for vintage public transport by accessing four locomotive footplates, three trams, two subway cars, one train carriage and a bus.

Visitors to Riverside can venture aboard The Tall Ship 'Glenlee', Glasgow's lovingly restored Clyde built ship. The Glenlee was launched in 1898 and today she operates an exciting programme of events and activities. Admission charges apply.

Kelvin Harbour is the city's new hub for river-based activities and services including a cross-river ferry, powerboat rides and a public slipway.

Look out for the historic Kelvinhaugh Ferry No 8 and other vessels belonging to the Clyde Maritime Trust.

Photo reproduced with the kind permission of the Riverside Museum: Riverside_Museum_Ext05 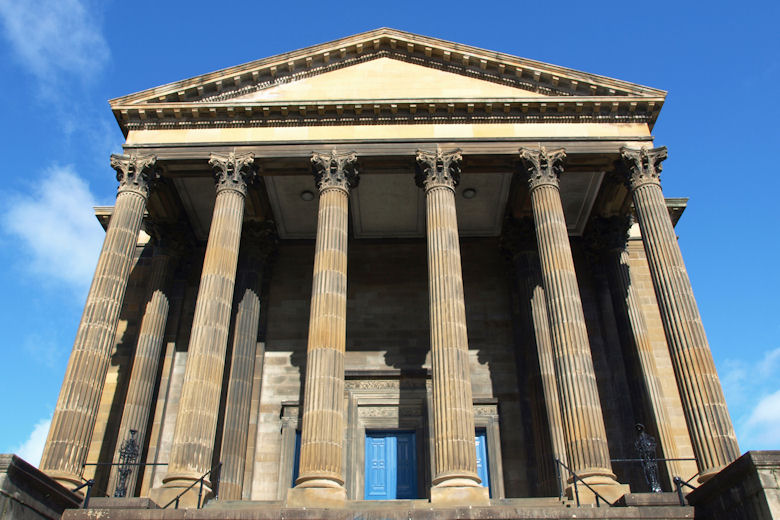 If your new to town a City Sightseeing bus tour offers the perfect way to see Glasgow and its museums, art galleries, beautiful parks and buildings. Enjoy the Gothic Cathedral, Kelvingrove Art Galleries and the Hunterian Museum. With audio guides in six languages and tickets valid for two days it's the hassle-free way to experience this vibrant Scottish city.

Our featured apartments in Glasgow