There has been a human presence in the area of Aberdeen since the Stone Age. Aberdeen as a city, grew up as two separate burghs: Old Aberdeen, encompassing the university and cathedral settlement, at the mouth of the River Don; and New Aberdeen, a fishing and trading settlement where the Denburn enters the Dee estuary.

Known as the energy capital of Europe and of course, more famously as the Granite City, Aberdeen is a prosperous, cosmopolitan city with an international population and a booming oil and gas industry. It's Scotland's third largest city and yet it is still compact enough for you to get around on foot.  Anyone wishing to be in the heart of the action will love City Centre Apartments located in the city centre funnily enough! They offer a selection of one, two or three bedroom apartments just minutes from the pubs and bars of central Aberdeen.

Aberdeen not only boasts fine architecture and museums, a fascinating history, a wealth of art and culture and a lively social scene, but it also has its own golden sandy beach!

Home to Scotland's third oldest university, Aberdeen plays host to a large student population for much of the year and therefore caters to a large variety of tastes in terms of culture, leisure and entertainment.

With Aberdeen having an incredibly rich golfing heritage, a range of stunning links courses and some lush parkland venues, the experience of golf here is one that will live long in the memory. Especially for those golfers like me, who tend to 'fade' the ball!  The prestigious Royal Aberdeen course, the sixth oldest golf club in the world, was the venue for The Scottish Open in 2014. Baker Road Apartments in the north of the city, near the university, has a selection of one and two bedroom serviced apartments and is an ideal base for this venue.

The nearby Royal Deeside - home to the Braemar Highland Games and regular holiday destination of the Royal family whilst at Balmoral - is also a big draw in the region. Successive monarchs have spent their annual summer holidays here so you'll be in good company exploring the lush moorland, shady pine forests, crystal clear rivers and imposing mountains.

The spectacular Cairngorms National Park is perhaps the jewel in the crown of this region and is also right on your doorstep. This park is Britain's largest National Park and celebrates its 10th anniversary in 2013. It's a living, working landscape with wild land at its heart, and an unrivalled range of outdoor attractions and activities to enjoy in a compact and accessible area. Bring your boots and fill them!  Located in the West End of Aberdeen are the one and two bedroom serviced apartments of The Spires offering easy access to some beautiful local landmarks.

Fusion
Situated right in the city centre, the décor here is fresh and modern, with lime green furniture and fresh flowers giving an airy and relaxed feel. There is a Perrier-Jouët Champagne Bar in the downstairs area with the main restaurant sited above. Fusion received the Restaurant of the Year accolade at the Grampian Hospitality Awards for 2014. The menu at Fusion has a contemporary feel, with Scottish classics given an update with influences from North Africa, the Continent and the Far East. Starters include gazpacho, falafel and beef tataki, along with Scottish favourites such as pickled herrings and salmon terrine, whilst main courses range from dim sum to pork loin and braised neck of lamb.

Moonfish Cafe
Established in 2004, the Moonfish Cafe is located on the Medieval streets of Aberdeen's Merchant Quarter with views of the 12th century Kirk of St Nicholas. The kitchen's constantly changing, innovative menu of modern British cuisine consists of a focused menu for lunch and dinner. Honest food made with local and seasonal produce, with a beverage list to match and close attention paid to an extensive gin list...ladies? The menu is not bound to tradition though and the chef and owner Christian Recomio takes inspiration from ingredients and flavours discovered on his worldwide travels. So look out for sardines with chickpea on the lunch menu, and cod with pak choi and lapsang souchong served at dinnertime.

Rendezvous at Nargile
The menu is contemporary Turkish, but you'll find lots of Middle Eastern as well as modern western influences here as well. Rendezvous at Nargile was voted the Best Mediterranean Restaurant in Scotland for 2013 at the Scottish Entertainment Awards. The dishes are all of an excellent standard – there is a wide selection of traditional mezes including muska (filo pastry with feta cheese), shahsuka (fried aubergine in tomato, garlic and onion sauce), and falafel (chickpea and herb croquettes with dip). Speciality main courses include the geyik antrecot izgara, which is the finest venison chargrilled and served with a brandy and a redcurrant jus.

Yatai Izakaya
Yatai Izakaya is an intimate local eatery with a casual atmosphere - modern Japanese food that practices traditional techniques while utilizing the best ingredients that Aberdeenshire has to offer. The menu at Yatai Izakaya features lots of excellent seafood such as squid, eel, prawn and includes dishes such as salmon with teriyaki, tuna loin with spicy butter Sauce, and Japanese beef flank.

Shri Bheema’s Indian Restaurant
This is perhaps the most popular and highly regarded curry house in Aberdeen. The menu includes both North and South Indian dishes and starters include samosas, pakoras, dishes from the tandoori oven, and kebabs. For a main course you can choose from a full range of tempting curries with South Indian speciality dishes such as idlis and dosas, as well as old favourites such as korma, daal, tikka masala, and more unusual curries like patia, kadai, and kulambu.

What to do in Aberdeen

Listed below are some of the great places to visit in Aberdeen. Click one to find out more. 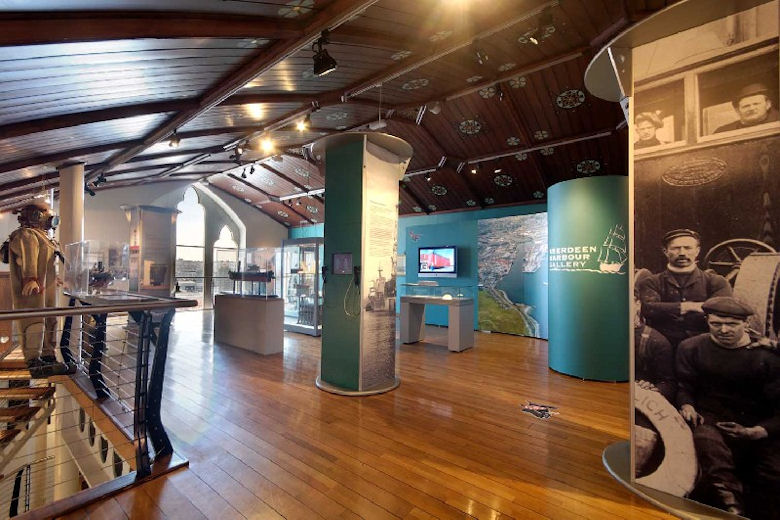 Aberdeen Maritime Museum tells the story of the city's long relationship with the sea. This award-winning museum is located on the historic Shiprow and incorporates Provost Ross's House, which was built in 1593.

The museum houses a unique collection covering shipbuilding, fast sailing ships, fishing and the port history. It's also the only place in the UK where you can see displays on the North Sea oil and gas industry.
The museum offers visitors a spectacular viewpoint over the busy harbour and the Leading Lights Café offers fine food in splendid surroundings and has a great shop selling all sorts of souvenirs, gifts, crafts, books and music with a distinctly nautical flavour.

Dunnottar Castle is a dramatic and evocative ruined cliff top fortress in a truly stunning setting.
Discover the importance of Dunnottar as you wander around the extensive buildings, from the keep through to the barracks, lodgings, stables and storehouses to the chapel and drawing room.
This once impregnable castle holds many rich secrets from Scotland's colourful past, and in fact William Wallace, Mary Queen of Scots and the future King Charles II all graced the Castle with their presence at one stage or another.

Most famously though, it was at Dunnottar Castle that a small garrison held out against the might of Cromwell's army for eight months thus saving the Scottish Crown Jewels from destruction. Crown, sceptre and sword now take pride of place in Edinburgh Castle.
A darker chapter is that of the ‘Whig's Vault', the gruesome story of the imprisonment in 1685 of Covenanters who refused to acknowledge the King's supremacy in spiritual matters!  The buildings were much neglected until 1925 when repairs made it possible to open it to visitors. 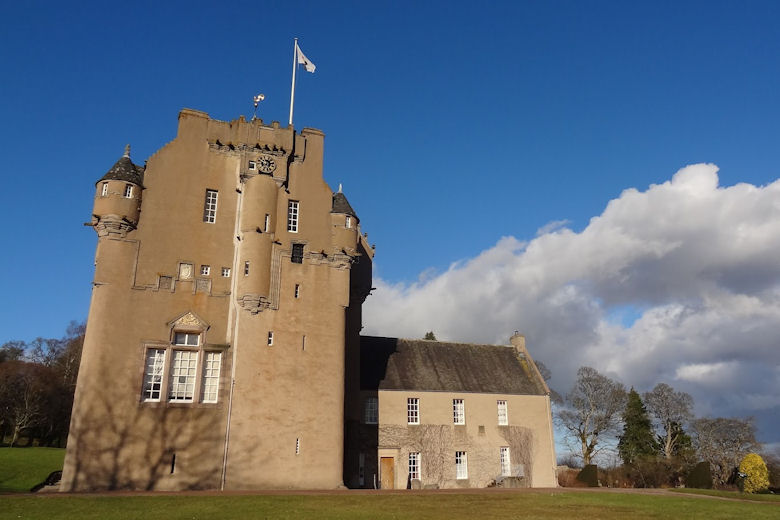 The majestic Great Hall is a room steeped in myth and legend and has hosted kings and queens across the centuries.

Crathes world famous walled garden, which comprises eight individual gardens, ranging from the formal to the modern, is an idyllic setting and during spring and summer, the Golden Garden is especially captivating. Rich in colour and fragrance, with historic yew hedges, manicured lawns and borders, this is truly a garden for all seasons. 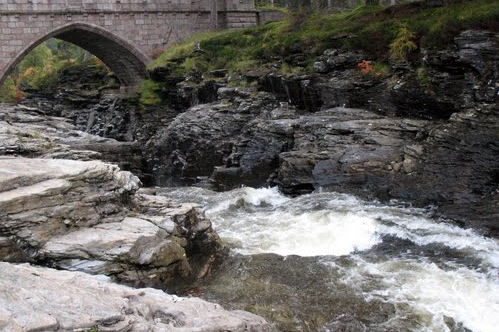 This natural wonder is one of the most breathtaking sights in the Scottish Highlands. The River Dee, which is ordinarily wide and shallow, narrows to a 5 foot wide gorge at this point and has carved out some amazing rock structures. The water is extremely powerful at this  juncture and the impressive rapids are pretty scary just to look at especially in the winter months, so do take extra care, especially if you're with the kids.

The views from the river looking up at the surrounding mountains are well worth the trip, and it's just a 5 minute hike down from the parking lot.

For more info on how to get there: http://www.royal-deeside.org.uk/ 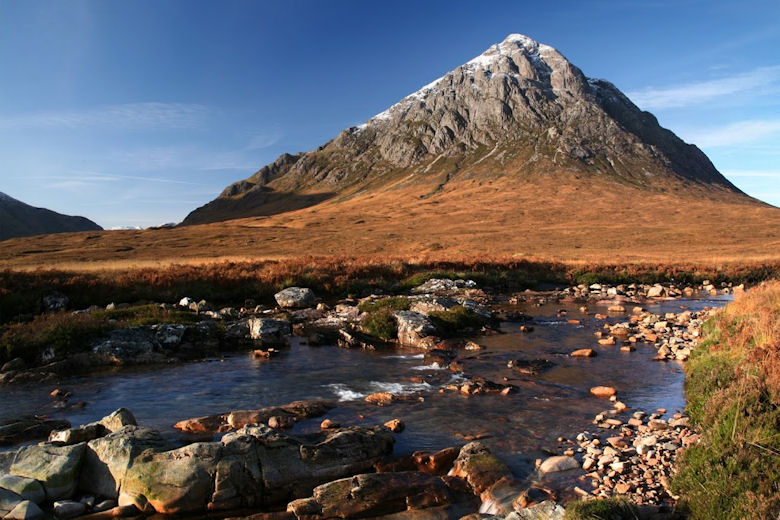 The Cairngorms National Park contains Britain's highest and most massive mountain range, its biggest native forests, spectacularly clean rivers and lochs, moorland and farmland and is a stronghold for some of Britain's best wildlife.

The CairnGorm Mountain Centre is your essential starting point, and is 9 miles south east of Aviemore.  In the winter season, CairnGorm Mountain is Scotland's most popular ski resort and offers a variety of runs for skiing, snowboarding and sledging.

The Ptarmigan Restaurant on the summit of CairnGorm mountain is the UK's highest restaurant at 1,097 m above sea level!

Fortunately, getting to the top of the mountain couldn't be easier as a funicular railway runs to the top all year round, meaning that you can take to the slopes without difficulty or simply admire the view. Grab a reviving hot chocolate  the Cas Bar at the summit before setting off.

There are many ways to enjoy the great outdoors within the Park. Have your camera ready and look out for the many fascinating and rare animals including capercaillies, mountain hares and pine martins along the way.

Alvie Stables offers horse riding and trekking for all ages and abilities. Take a lesson, or enjoy rides or hacks of up to an hour and a half.

Rothiemurchus is home to a multi-activity centre where you can try your hand at everything from clay pigeon shooting and archery to 4x4 driving, gorge walking and white-water rafting.

If you're looking for more active adventures, the Glenlivet estate near Tomintoul covers 90 square miles and offers great fishing opportunities and many miles of waymarked walking and cycle trails. 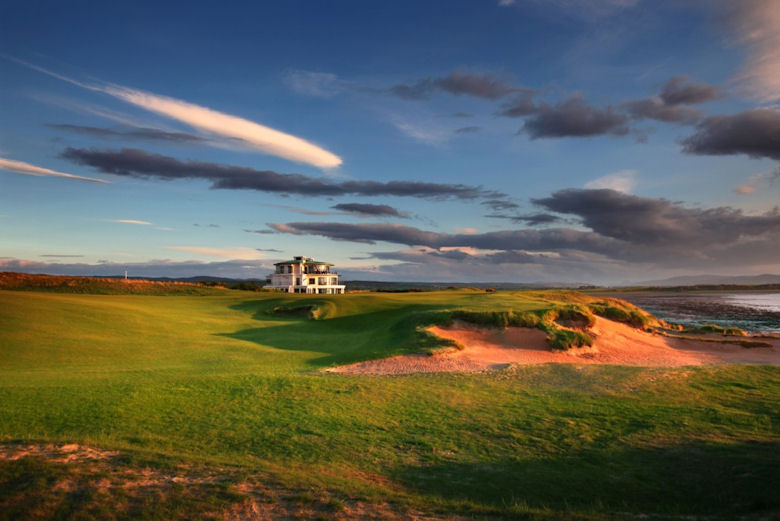 Historic Royal Aberdeen Golf Club in Aberdeen, Scotland, was founded in 1780 and is the venue for the 2014 Scottish Open. It is also the 6th oldest golf club in the world.

Balgownie is a classic links course designed to test the better golfer, one who can accommodate the many variable conditions this arduous course can throw at you.

Balgownie's front nine holes rank amongst the very best in the world. No two are the same within a natural ecosystem, interspersed with rich turf and tight rolling fairways that are a sheer delight to behold.

The 1st hole offers one of the more difficult challenges, leaning towards you and sloping off to the left with Aberdeen Beach immediately behind. The following holes make up the most unaffected piece of golf terrain you are ever likely to encounter and worthy of all the praise and rancour that gets poured upon it.

Our featured apartments in Aberdeen