The history of Leeds can be traced back to the 5th century when the Kingdom of Elmet was covered by the forest of "Loidis", the origin of the name Leeds.

Leeds is now the beating cultural, financial and commercial heart of West Yorkshire and the third largest city in the UK.

Today, Leeds is ranked as a 'gamma world city' by the Globalization and World Cities Research Network.

It's home to some major UK headquarters such as ASDA, Capita and First Direct. Did you know that Marks and Spencer was founded in Leeds Kirkgate Market as a penny bazzar?

Leeds is served by three universities, and has the fourth largest student population in the country, not surprising with the fantastic night life! The mass of students make up the population of 751,500 at the last census.

When in Leeds it’s only right and proper to indulge in a little retail therapy; in fact it’s hard to avoid with its close on 1,000 retail units!

There's the beautiful Victoria Quarter, most of which is covered with beautiful glass ceilings adorned with mosaics.

The upmarket shops in the Victoria Quarter feature a big Harvey Nichols store which absolutely has to be visited for a "fab" spot of lunch to recharge after all that shopping, darling!

The First Direct Arena which opened in 2013 has played host to some incredible artists and has recently been voted Best New Venue in the World 2014 at the Stadium Business Awards!

Our Top 5 Sporting Venues in Leeds

Leeds United.
the city's premier football club, is based at Elland Road Stadium and the legendary team featured in the recent film The Damned United. At only 10 minutes from Leeds Station there should be no excuses not to visit.

Carnegie
Rugby fans are spoiled for choice with both the rugby league World Club Challenge winners Leeds Rhinos, and the Leeds Carnegie Rugby Union Club both based at Headingley Carnegie Stadium. The facilities are family friendly, the tickets are great value, and the amazing atmosphere is not to be missed. Just a 15 minute taxi ride from Leeds Station its easily accessible.

Headingley
If you fancy a more relaxed day of sport then try Headingley Cricket Ground for a spot of cricket. Home to Yorkshire Cricket Club since 1890, its safe to say Headingley is the home of Yorkshire cricket. Tickets are reasonably priced and the ground itself is pretty nice to look at! Again, just a 15 minute taxi ride from Leeds Station. Or if you fancy it you can get the train to Headingley and walk which takes about 10 minutes.

John Charles Centre for Sport
Home to the Leeds City Athletics Club and has fantastic facilities for the public. Well worth a visit! A 10 minute drive from Leeds Station, but easily accessible by public transport.

Leeds Sports Centre
If you fancy yourself as an amateur footballer or even a pro, then the modern indoor five-aside is the place to visit. Located just 8 minutes from Leeds Station and close to Elland Road Stadium, you could go for a quick game yourself before seeing the real thing.

Leeds has great transport links to all over the United Kingdom via the mainline Leeds Railway station which has 17 platforms making it the largest outside of London.

What to do in Leeds

Listed below are some of the great places to visit in Leeds. Click one to find out more. 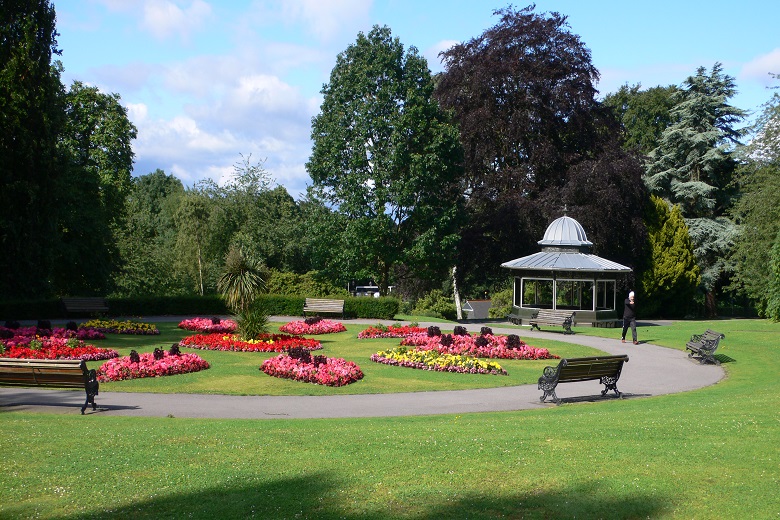 Roundhay Park in Leeds is one of the biggest parks in Europe with over 700 acres of park, woodland, lakes and gardens. The estate was purchased by the City of Leeds in 1872 and was opened as a public park by His Royal Highness Prince Arthur on the 19th of September the same year. Within the park you can visit Tropical World, Waterloo Lake or The Mansion. 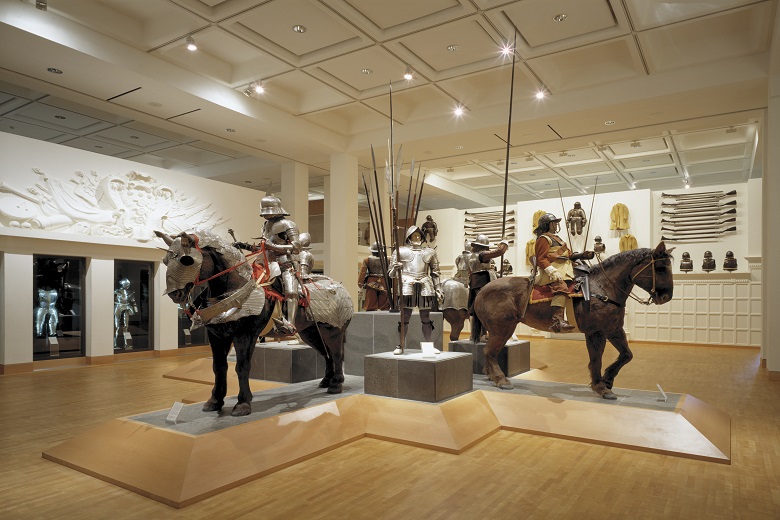 The Royal Armouries is the United Kingdoms's National Museum of Arms and Armour. It is also the United Kingdom's oldest museum, and one of the oldest museums in the world. The Royal Armouries is one of the ancient institutions of the Tower of London and was originally engaged in the manufacture of armour for the Kings of England. In 1545, it is recorded that a visiting foreign dignitary paid to view the collection at the Armoury. By the time of Charles II, there was a permanent public display there; the "Spanish Armoury" which included instruments of torture and the "Line of Kings" - a row of wooden effigies representing the kings of England. This makes it the first museum in Britain. 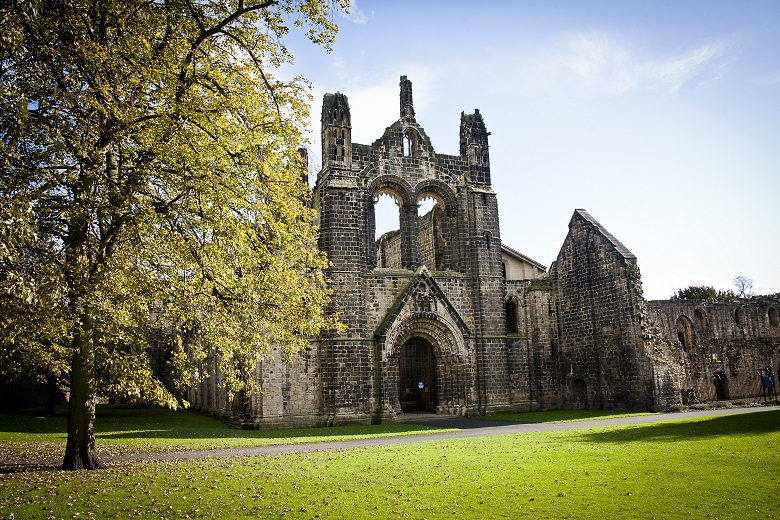 Kirkstall Abbey is a Grade 1 listed ruined Cistercian monastery in Kirkstall, just north-west of Leeds city centre. It's set in a public park on the north bank of the River Aire. It was founded circa1152. It was disestablished during the Dissolution of the Monasteries under the auspices of Henry VIII.

The picturesque ruins have famously been drawn and painted by artists such as J.M.W. Turner, Thomas Girtin and John Sell Cotman. Kirkstall Abbey was acquired by Leeds Corporation as a gift from Colonel North and opened to the public in the late 19th century. The gatehouse became a museum - Abbey House Museum. 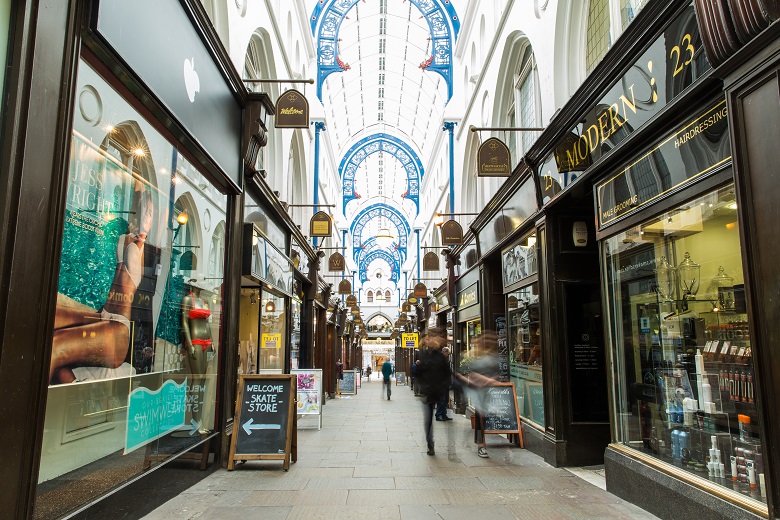 Thornton's Arcade was built by Charles Thornton and opened in 1877. It was the first of Leeds' famous shopping arcades, and has some beautiful Victorian architecture. A clock at the west end includes animated figures of Robin Hood, Friar Tuck, Richard the Lionheart and Gurth the Swineherd, who appear to strike the clock's bell with their fists.

This is shopping as a show, as an activity in itself, rather than a utilitarian means to an end. Thornton's arcade is an early indication of the way shopping would develop. The arcade was built in Briggate, one of the oldest streets in Leeds, with a long history of trading. Briggate is also home to County Arcade, another Victorian masterpiece of shopping design. This is part of the larger development known as the Victoria Quarter, built around 1900  at the height of the Industrial Revolution.

Four fifths of industrial production during the Industrial Revolution went into supplying the home market, so shopping streets like Briggate played an essential role in encouraging industrial development. This might be something to think about next time you're wandering around the shops, and having a cup of coffee in a cute little shop. 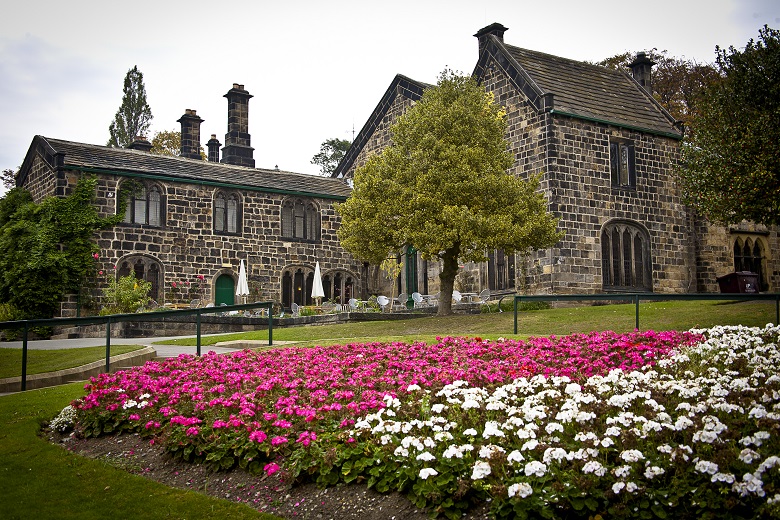 Abbey House Museum in Kirkstall, Leeds is housed in the gatehouse of the ruined Kirkstall Abbey, a grade II listed building.

The ground floor of the museum is set out as an area of Victorian streets, illustrating a range of shops and services and including original shop fittings etc. Upstairs galleries feature the history of Kirkstall Abbey, Childhood, and Leeds Social History, as well as temporary exhibitions.

Our featured apartments in Leeds