Lying to the west of the historic Roman and Mediaeval City of London, the West End was long favoured by the rich elite as a place of residence because it was usually upwind of the smoke drifting from the crowded City. It was also close to the royal seat of power at Westminster, and is largely contained within the City of Westminster.

Developed in the 17th, 18th and 19th centuries, it was originally built as a series of palaces, expensive town houses, fashionable shops and places of entertainment. The areas closest to the City around Holborn, Seven Dials and Covent Garden historically contained poorer communities that were cleared and redeveloped in the 19th century.

The West End of London contains many of the city's major tourist attractions, and is also the entertainment centre of the UK with the largest shopping district in Europe, the home of the UK theatre and film industry as well as numerous upmarket bars, restaurants, hotels and nightclubs.

Today the name "West End" can refer either to the entertainment district around Leicester Square and Covent Garden or to the shopping district centred around Oxford Street, Regent Street and Bond Street. We have some very affordable accomodation in this central area, notably the apartments at St Christophers Place, and the serviced apartments at Citadines Trafalgar Square are very nice too, although slightly more expensive.

Famous streets in the West End include Baker Street, home to the legendary detective Sherlock Holmes. Harley Street is of course where one would go to seek expensive private medical advice! Old Compton Street is at the heart of London's thriving gay scene. Park Lane, Piccadilly, Shaftesbury Avenue, Tottenham Court Road and Carnaby Street are all names synonymous with shopping whether it be for a very expensive Rolls-Royce, a top-of-the-range music system or a trendy T-shirt and a traditional pint of ale.

The West End also has many notable public spaces such as Berkeley Square, Grosvenor Square, Hyde Park Corner, Leicester Square, Marble Arch, Oxford Circus, Piccadilly Circus and last but not by any means least, Trafalgar Square with it's famous column on which the hero of that battle, Admiral Lord Horatio Nelson resides.

London's West End is famous for its fantastic range of theatres, tourist attractions, hotels and shopping. There's always something happening on these iconic central London streets. Go shopping on Oxford Street, watch the advertisement displays at Piccadilly Circus, go and see one of the oh so many fabulous theatres and musicals or why not go and take a stroll around Trafalgar Square and pop your head into the National Gallery (which also offers a fantastic afternoon tea!). And don't forget the National Portrait Gallery around the corner or to pop into the Chandos pub for a pint.

National Gallery at Trafalgar Square
The National Gallery displays more than 2,000 Western European paintings from the middle ages to the 20th century. Discover inspiring art by Botticelli, Leonardo da Vinci, Rembrandt, Gainsborough, Turner, Renoir and Van Gogh. The pictures in the collection belong to the public and admission to see them is free. There are special exhibitions, lectures, video and audio-visual programmes, guided tours and holiday events for children and adults. The first room to the right as you go in, is superb, as that's where the Van Gogh's and Picasso's are normally housed.

Piccadilly Circus & Leicester Square
Leicester Square in London is an awesome entertainment area with cinemas, bars, cafes, restaurants, attractions and theatres. Because it has so many cinemas, Leicester Square hosts lots of big movie premieres. Piccadilly Circus itself acts as a thoroughfare or meeting point more than an end destination. It's a good central place to start a day of shopping and sightseeing however, or even a night of drinking, eating and dancing! At its very centre you'll also find a pedestrianised section with a fountain called the Statue of Eros - a picturesque spot to fire off a holiday snap/selfie. You'll also find the famous illuminated advertisements that wrap themselves around one of the tallest buildings in the square, giving you a bit of a New York style feeling!

Somerset House
Somerset House is a spectacular neo-classical building in the heart of London, sitting between the Strand and the River Thames. During the summer months 55 fountains dance in the courtyard, and in winter you can skate on London's favourite ice rink. Somerset House also hosts open-air concerts and films, contemporary art and design exhibitions, family workshops and free guided tours of spaces usually hidden to visitors. It's also home to the wonderful Courtauld Gallery and its splendid collection.

Covent Garden and Covent Garden Piazza
Covent Garden Piazza is the area where the world famous Covent Garden Market is held. The market held here consists of over forty stalls selling a variety of quality goods including antiques, clothing and craft items. The area was formerly the site of London’s largest fruit and vegetable market which has since moved to Bermondsey. The piazza is a favourite location for street performers, and Peruvian and classical musicians can regularly be found in the courtyards amidst the stalls.

What to do in the West End

Listed below are some of the great places to visit in the West End. Click one to find out more. 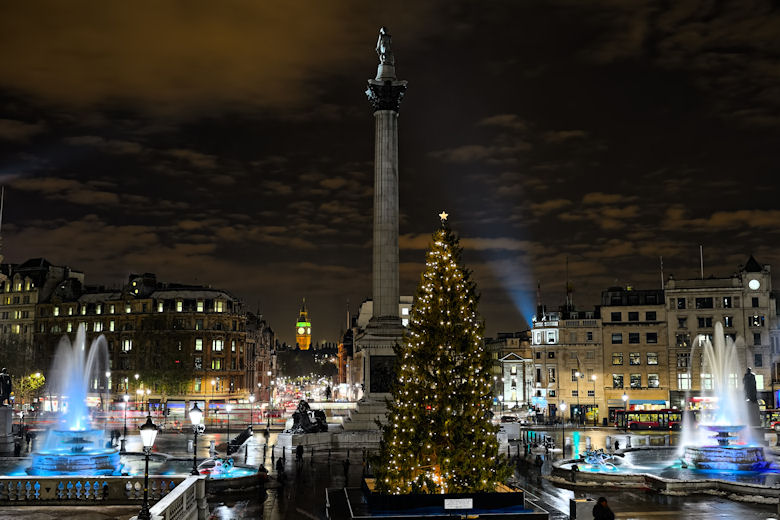 Trafalgar Square is one of the most famous places in London and is home to Nelson's Column & Admiralty Arch.

Flanked by the River Thames to the South, it's also the gateway to The Mall and Buckingham Palace to the north, Horseguards Parade and Parliament to the west and Leicester Square and Theatreland to the east.  Today Trafalgar Square is used for a wide range of events and activities throughout the year, including rallies and demonstrations, filming and photographic shoots, and promotional and performance based events.

Nelson's Column was erected to honour Admiral Lord Horatio Nelson (1758-1805), following his famous victory over the french at the Battle of Trafalgar in 1805.  The four bronze panels at the base of the column depict some of Nelson's other famous battles and are cast from guns captured at those very same battles. 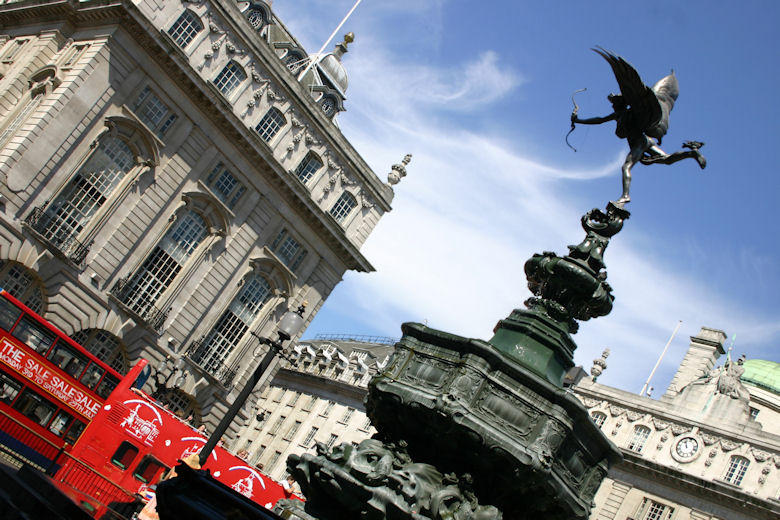 Piccadilly Circus is one of the most well known locations in the West End with it's big neon signs and the famous statue of Eros in the middle.

The name 'Piccadilly' is said to have originated from a 17th century frilled collar named piccadil and is attributed to the area by a tailor who became rich making piccadils when he lived there. The creation of Shaftesbury Avenue in 1885 turned the plaza into a busy traffic junction, and this made Piccadilly Circus attractive for advertisers, who installed the first illuminated billboards in London in 1895. For some time the plaza was surrounded by billboards, creating London's version of Times Square, but now only one building carries the large electronic displays.  This busy area in the heart of the West End is reached via Piccadilly underground station which bears it's name.

The statue of Eros, the centrepiece of the circus, is officially called the Shaftesbury Memorial Fountain and was built in 1893 as a memorial to the philanthropic seventh Earl of Shaftesbury, who died in 1885. The semi-nude statue on top of the fountain depicts the Angel of Christian Charity but was later renamed Eros after the Greek god of love and beauty.

Our featured apartments in The West End Guide