The City of London Guide

The City of London is the historic centre around which modern London grew and the City's boundaries have remained virtually unchanged since the Middle Ages.

Fire, bombing and post-war redevelopment have meant that the City, despite its incredible history, has relatively few intact historic structures remaining, however the Monument to the Great Fire of London (also known just as "the Monument"), The Sir Christopher Wren designed St Paul's Cathedral, the Guildhall and the Royal Exchange are notable exceptions. Sovereign House Apartments are ideally situated to explore all of these.

Dr. Johnson's House, Mansion House, 2 King's Bench Walk and Prince Henry's Room are notable survivors of heavy bombing of the Temple area, which has largely been rebuilt to its historic form. A few small sections of the Roman London Wall exist, near the Tower of London and also in the Barbican area. Cheval Three Quays has a variety of fantastic serviced accomodation options if you're in the area, some with views over the Tower of London itself.

It's now just a tiny part of the vast metropolis that is Greater London and is often referred to simply as the City or the Square Mile, because geographically it's just over one square mile in area.

The UK''s financial services industry has historically been based here and in the medieval period, the City was the full extent of London. The City today remains a major global business and financial centre.  Even though The City has a resident population of only around 10,000, about 330,000 people work there daily, mainly in the financial services sector, although the legal profession has a strong presence in the west of the City, especially in Temple and Chancery Lane.

The City has many visitor attractions, as well as a host of characterful pubs, bars and restaurants, and there is a lively nightlife in the Bishopsgate area, towards Shoreditch. The market at Smithfield is one of London's main markets and the country's largest meat market.  In the east of the City is Leadenhall Market, a fresh food market that is also a visitor attraction.

The Tower of London is not strictly within the City, but is still a must-see London attraction located to the southeast of the City. Other landmark buildings include a number of  modern high-rise buildings such as The Gherkin, Heron Tower and Tower 42 as well as the more low-rise Bank of England, the famous law courts of the Old Bailey and the innovative Lloyd's insurance building. The latter 3 of these are within walking distance of the one bedroom serviced apartments at Fraser Residence Blackfriars.

St Pauls Cathedral
Enter St Paul’s and enjoy the cathedral's awe-inspiring interior. Take advantage of a touch-screen multimedia guide or join a guided tour to explore this iconic building, as both are now included with the sightseeing admission charge. Venture down to the crypt and discover the tombs and memorials of some of the nation’s greatest heroes such as Admiral Lord Nelson and the Duke of Wellington. Also visit Oculus, an award winning 270° immersive film experience.

Visitors can try out the acoustic quirks of the Whispering Gallery and continue their climb to the Golden Gallery to enjoy breathtaking panoramic views across London.

Tower of London
Despite the Tower of London's grim reputation as a place of torture and death, within these walls you will also discover the history of a royal palace, an armoury and a powerful fortress. Don’t miss Royal Beasts and learn about the wild and wonderous animals that have inhabited the Tower, making it the first London Zoo.

Discover the priceless Crown Jewels too, newly displayed in 2012, and join an iconic Beefeater on a tour and hear their bloody tales, or stand where famous heads have rolled, learn the legend of the Tower's ravens, storm the battlements, get to grips with swords and armour and much more!

Monument
The Monument stands at the junction of Monument Street and Fish Street Hill in the City of London. It was built between 1671 and 1677 to commemorate the Great Fire of London and to celebrate the rebuilding of the City. The fire began in a baker’s house in Pudding Lane on Sunday 2nd September 1666 and was finally extinguished on Wednesday 5th September, after destroying the greater part of the City. The Monument, as it came to be called, is 61 metres high (202 feet) – the exact distance between it and the site in Pudding Lane where the fire began.

St Katherine Docks
St Katharine Docks, in the London Borough of Tower Hamlets, was once one of the biggest commercial docks serving London, on the north side of the river Thames just east (downstream) of the Tower of London and Tower Bridge. Today it's a lovely little secret spot where you can enjoy a delicious meal from one of the many restaurants around the area and gaze out onto all of the expensive sailing boats and small yatch's anchored in the dock.

Tower Bridge
If you are in the City of London why not visit the Tower Bridge exhibition? Inside the Exhibition you'll learn all about how the world's most famous bridge works and the history behind its creation. Enjoy the panoramic views from the walkways situated 45 metres above the Thames and visit the original Victorian engines.

You'll also be able to experience the most exciting development to the Exhibition since it originally opened: glass floor panels – a unique viewpoint of London life beneath your feet!

Things to do in the City of London

Listed below are some of the great places to visit in the City of London. Click one to find out more. 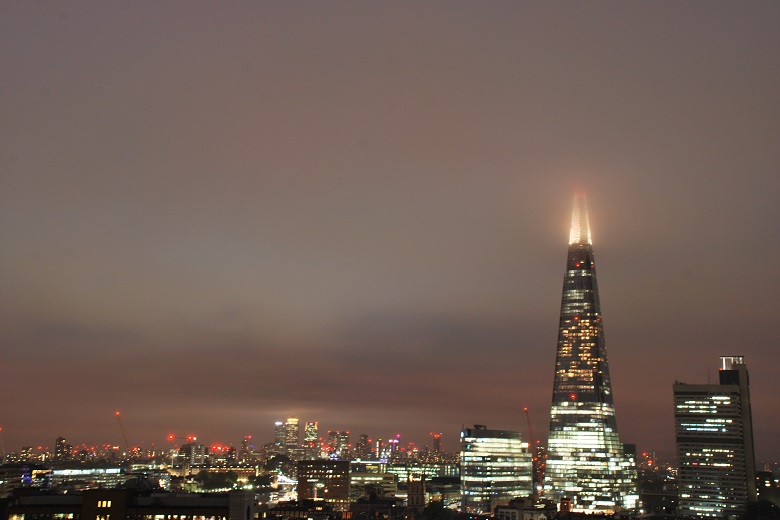 The Shard is an iconic, landmark building on the London skyline, designed by Master Architect Renzo Piano.

At a height of 1,016ft (310m), it is now the tallest building in Western Europe, The Shard redefines London's skyline and will be a dynamic symbol of London, recognisable throughout the world, for years to come. The viewing platform, hotel and restaurant have already become part of the fabric of London life. For more information: http://www.theviewfromtheshard.com/

We highly recommend visiting The Shard! We've been - see our blog.

The Monument, City of London 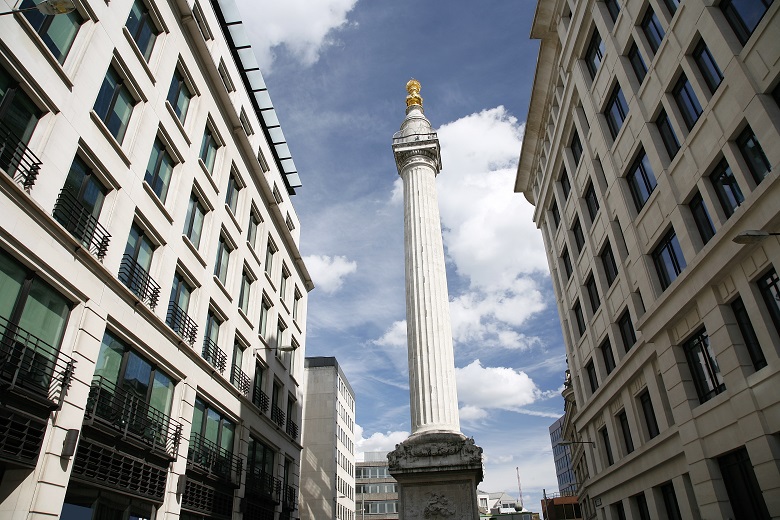 The Monument was built to commemorate the Great Fire of London and to celebrate the rebuilding of the City after the Fire. The fire began in a baker's house in Pudding Lane on Sunday 2nd September 1666 and was finally extinguished on Wednesday 5th September after destroying the greater part of the City. As part of the rebuilding, it was decided to erect a permanent memorial of the Great Fire near to the place where it began and this was designed by Sir Christopher Wren. The Monument, as it came to be called, is 61 metres high (202 feet) - the exact distance between it and the site in Pudding Lane where the fire began.

The Monument was completely renovated in a £4.5 million project from 2007 until it's reopening in 2009 and now every year, over 150,000 visitors climb the 311 spiral steps to the Monument's observation gallery to enjoy unique and exhilarating views across the Capital.

You can find The Monument located at the junction of Monument Street and Fish Street Hill, just a few steps away from Monument underground station.

The Bank of England & Museum 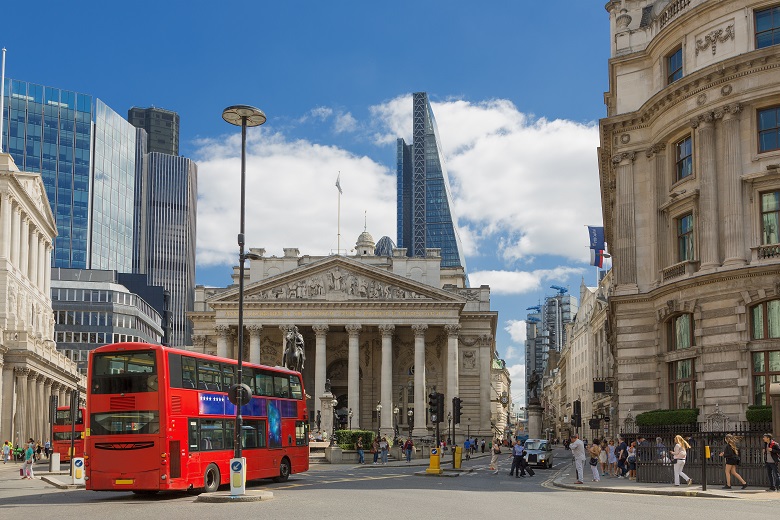 The Bank of England is more than 300 years old and is the central bank of the United Kingdom. Sometimes known as the 'Old Lady of Threadneedle Street', the Bank was founded in 1694, nationalised on 1st March 1946, and gained independence in 1997. It stands at the centre of the City's Square Mile, on Threadneedle Street.

The Bank of England Museum tells the story of the Bank from its foundation in 1694 to its role today as the United Kingdom's main bank. The historical displays include material drawn from the Bank's own collections of books, documents, silver, prints, paintings, banknotes, coins and photographs.

There is a display of gold, including Roman and modern gold bars, alongside pikes and muskets once used to defend the Bank. Also the latest computer technology and audio visual displays explain the Bank's present day role in the world of finance. The entrance to the Museum is in Bartholomew Lane and is just a short walk from either Bank or Monument underground stations.

Our featured apartments in The City of London Guide