Use of the South Bank began in 1917 with the building of the massive County Hall at Lambeth, but it really took off with the construction of the Festival Hall in 1951 (as part of the Festival of Britain) and it's now one of London's premier arts and entertainment districts.

The South Bank is the cultural heart of London and home to some of London's most iconic attractions, theatres, and art and design-led venues. This eclectic area is buzzing with things to see and do all year round and, although it developed more slowly than London's more heavily populated Northern side, it currently forms a significant central London tourist district stretching from the Design Museum in the East to the London Eye in the West. County Hall's one bedroom serviced apartments are an ideal base from which to explore all that this area has to offer.

The hugely popular London Eye is adjacent to The County Hall and is the focus of many families and tour groups beginning their tours of London. The County Hall building itself is well worth a visit too as it houses the Sea Life London Aquarium and the London Film Museum.

Following along the Riverside Walk heading east you'll find the amazing Southbank Centre. This superb cultural and arts venue, which offers an astonishing array of events throughout the year, comprises the Royal Festival Hall, the Queen Elizabeth Hall, The Purcell Room and The Hayward art gallery. And if that's not enough culture for you, just pop across to The Royal National Theatre which has a worldwide reputation for its award-winning shows!  The British Film Institute at Southbank also has the largest IMAX cinema in the UK!

It absolutely will not stop there though! Between Blackfriars and Southwark Bridge you'll be able to find two not-to-be-missed gems. The Tate Modern art gallery is one of the best contemporary art galleries to be found anywhere in the world, with the displays housed in a truly exciting space. There is inevitably something new, strange and interesting to see in the huge Turbine Hall gallery. And next door to this latest London icon you also have one of the very oldest - Shakespeare's Globe Theatre.

Once you've had your fill, the innovative (and now sturdy) Millennium Bridge is the perfect way of getting back to civilization and the North once more!

OXO Tower Restaurant, Bar & Brasserie
Located on the 8th floor of the OXO tower you'll enjoy a delicious meal with glorious views over The Thames and City skyline to the glorious sound of jazz tunes. Simple, fresh and comforting dishes combine to set up this modern Brasserie menu and everything is sourced from the best local and seasonal ingredients. Enjoy a delicious meal of tender Welsh lamb rump with truffle mash or roasted cod with a cuttlefish and butterbean stew. Unique to the Brasserie, ‘Not Afternoon Tea’ is a must-try experience for those who enjoy a sweet treat with a difference. A selection of exotic desserts includes apricot frangipane, thyme pannacotta, and green tea cake.

Skylon
A stylish bar and bistro, Skylon’s plush furnishings and floor-to-ceiling windows create a seductive and contemporary atmosphere. This sleek and simply decorated restaurant is chic and relaxed, whilst exuding sophistication. Look out for the regularly changing menus with an emphasis on seasonal ingredients combined simply and imaginatively to produce modern British cuisine.

Ping Pong – South Bank
Offering a wide range of Asian treats, the sleek Ping Pong restaurants pay homage to the ancient traditions of Chinese tea houses. With a big choice of dumplings and steamed buns, the Ping Pong menu also offers an array of fragrant Chinese soups and rice pots. There are plenty of familiar Chinese delicacies, with spring rolls, prawn toasts and honey-glazed spare ribs but for dessert, why not try Ping Pong’s banana and chocolate spring roll or the ice cream filled rice pastry, mochi, and finish with a lively Ping Pong cocktail or soothing Oriental tea!

The Laughing Gravy
The Laughing Gravy is one of London's best kept secrets and is located near to Waterloo and Southwark tubes as well as to the vibrant Southbank district area. Relaxed and inviting, they offer an incredible menu of fresh, seasonal dishes with a well-chosen wine list that reflects great attention to detail.

Borough Market
London's best, and perhaps best-known, food market is chock-a-block with delicious takeaway choices. Gourmet goodies run the gamut, from fresh loaves and rare-breed meats, via fish, game, fruit and veg, to cakes and all manner of preserves, oils and teas; head out hungry to take advantage of the numerous free samples! Always!

What to do on the South Bank

Listed below are some of the great places to visit on the South Bank. Click one to find out more.

Thames Cruises - a personal favourite of ours! 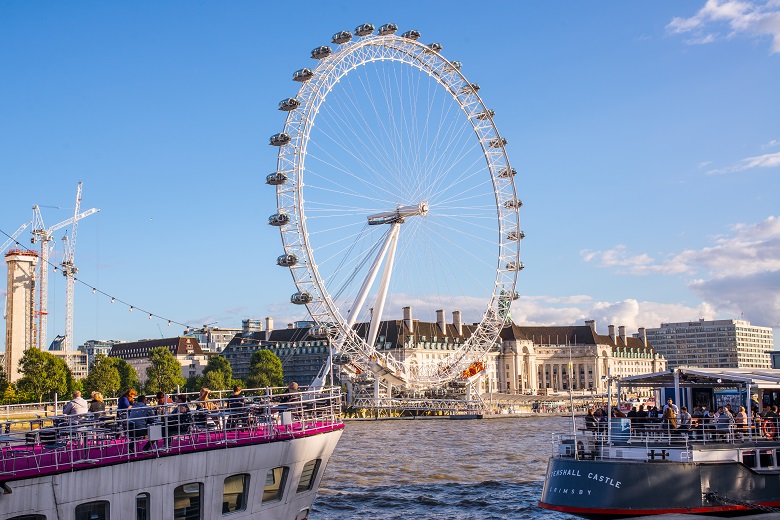 We went Thames Cruising with the very friendly people at Thames River Cruises and we travelled from Westminster Pier to Greenwich. We were very impressed with their discounted offer where you just present a valid Oyster card and you can get a 1/3 off your ticket price! It was a lovely day spent walking in and around beautiful, historic Greenwich and the arty, buzzy South Bank and we finished it off with Fish & Chips from the fantastic Poppies in Camden! What a day.

See what we got up to here: http://bit.ly/thamesPAS 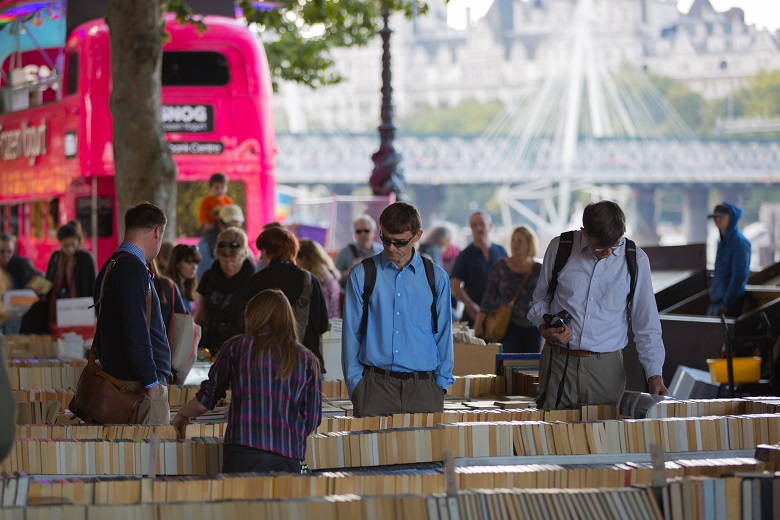 The Southbank Centre is an arts and performance organisation comprised of 4 main spaces - the Royal Festival Hall, the Queen Elizabeth Hall, the Purcell Room and the Hayward Gallery. The Royal Festival Hall opened in 1951 as part of the Festival of Britain and is at the heart of the Southbank Centre. The RFH welcomes orchestras, operas and contemporary musicians from around the world. The RFH was joined in 1967 by the Queen Elizabeth Hall which, as the second largest venue, houses both big names as well as emerging artists. The Hayward Gallery is situated behind the Queen Elizabeth Hall and has been home to some of the world's most adventurous and innovative artists. 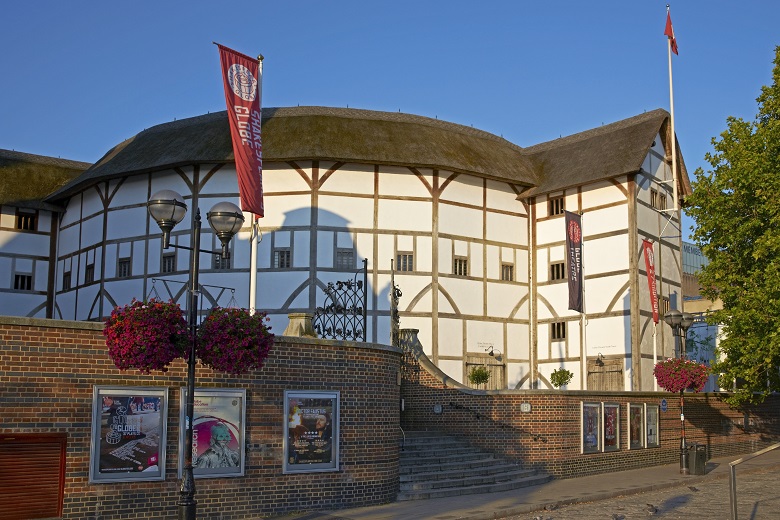 Located on the banks of the River Thames the new Shakespeare's Globe Theatre is a faithful reconstruction of the open-air playhouse designed in 1599 where many of Shakespeare's plays were performed.

There is an exhibition open all year round where you can find out about the life and works of William Shakespeare as well as discover more about the history of the area. During the summer season (it is open air!) Shakespeare's plays are shown regularly along with a varied selection of more modern works. 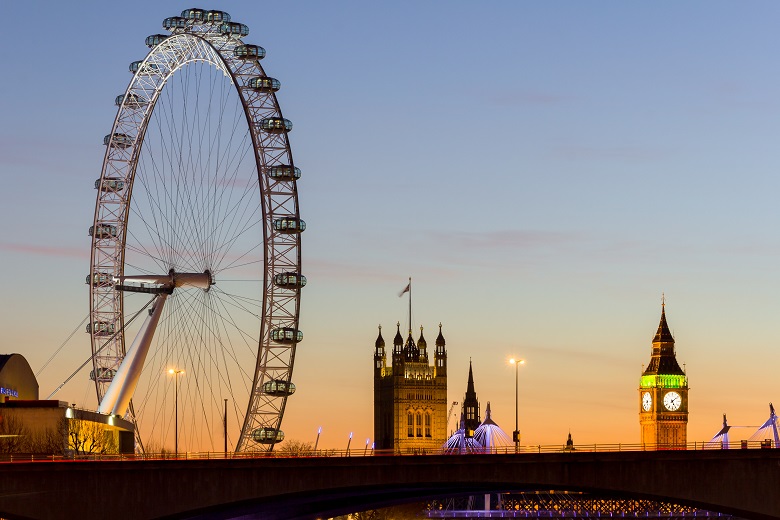 At 135 metres high, the Coca-Cola London Eye is one of the world's tallest observation wheels, providing up to 40 kilometres of panoramic views on a clear day. The gradual rotation in one of the 32 high-tech glass capsules takes approximately 30 minutes, offering breathtaking views of London.

Within each capsule, six touch screens powered by Samsung Galaxy Tab 10.1 allow you to explore the capital's famous landmarks, such as Big Ben, Buckingham Palace, Trafalgar Square, St Paul's Cathedral, Canary Wharf and so on. With those inspiring perspectives on offer, the London Eye will lift you up like nothing else. 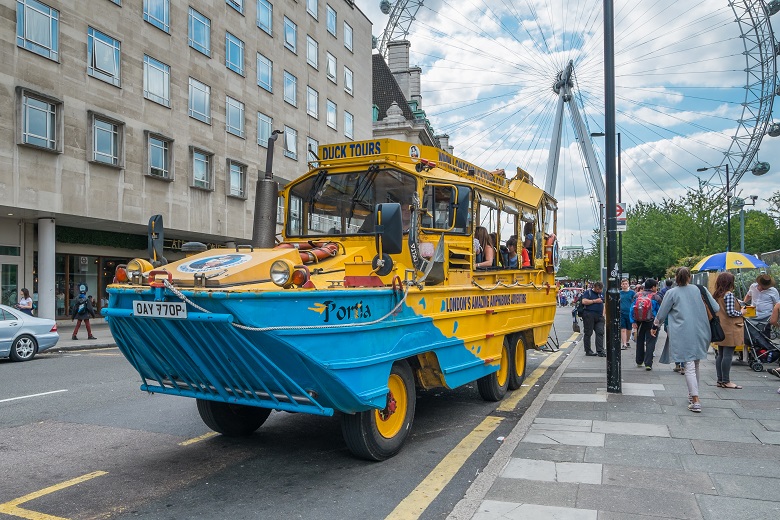 A Duck Tour is a unique way to see London. You are rewarded not only with a live guided road tour of the City of Westminster, passing landmarks such as the Houses of Parliament, The London Eye and Big Ben, but you are also treated to an unforgettable trip on the river, without ever leaving the comfort of your seat!

All this on an historic vehicle used for the D-day landings in 1944. 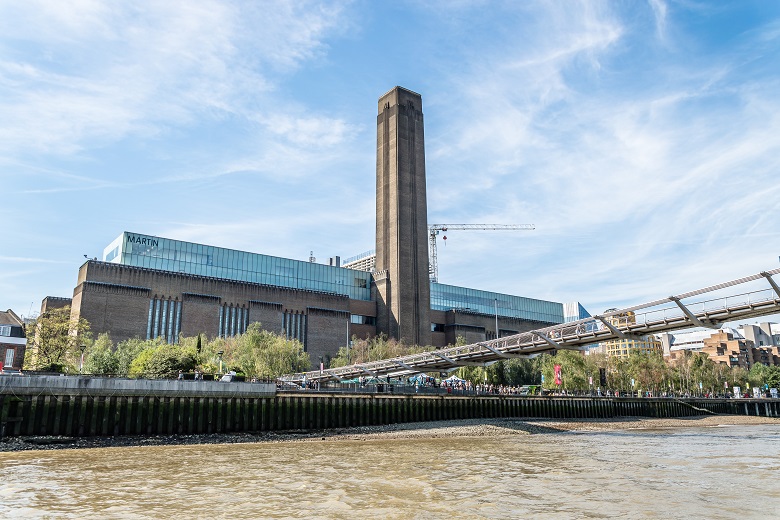 The Tate Modern is one of London's most iconic venues and is a national gallery of international modern art that also houses a collection of British art from the 1500's. It is the most visited art gallery in the world and apart from the permanent collections there is always something new to see. The Gallery was created in 2000 from a disused power station in the heart of London and the building's vast size becomes apparent when you enter via the dramatic turbine hall which is 152 metres long. It's one of our favorite places and is not to be missed. Grab a bite or a drink in the sometimes overcrowded cafe and check out the Thames from the outside terrace.