Former residents of the borough of Kensington and Chelsea include Sir Winston Churchill, the poet T.S. Eliot, wit and dramatist Oscar Wilde, A.A. Milne, the author of Winnie the Pooh, the Egyptologist Howard Carter, discoverer of the tomb of Tutankhamen and pre-Raphaelite painter Sir Edward Burne-Jones to name but a few! Some company. And if you're a history buff, definitely make sure to visit the Sambourne Family Home. Cartoonist Edward Linley Sambourne and his family lived there from 1874, and this very interesting house still contains most of the original furniture and fittings.

The affluent area of Kensington is home to many outstanding restaurants and bars, as well as having a rich cultural heritage. Enjoy a concert at the Royal Albert Hall, or spend a day shopping (or window shopping...) on High Street Ken as it's affectionately known. Kensington Gardens and Kensington Palace (Princess Diana's former residence) are both wonderful places to visit too.

Fashionable Kensington will delight lovers of shopping and Kensington High Street in particular should temporarily sate their appetites...after which the boutiques and antiques of the adjacent Kensington Church Street can be attacked!  And whilst making your various purchases, don't forget to pay a visit to the Whole Foods Market, a huge organic food market housed in the Barkers building, a former Art Deco style department store.

For those of a more tranquil disposition, there are plenty of green spaces in which to relax, with this area being home to two of London's most magnificent Royal Parks: Kensington Gardens and Hyde Park.

The Orangery
The Orangery is a light and airy, elegant establishment set in the breathtaking formal gardens of Kensington Palace. It's the perfect venue for a traditional English afternoon tea. ‘I took tea at the palace’ is not something you can say every day.

Royal Albert Hall
The Royal Albert Hall is one of the world’s most famous stages. Opened by Queen Victoria in 1871, the Hall hosts over 360 events annually which include classical music, jazz, world music, circus, rock, pop, opera, dance, comedy and tennis. Enjoy daytime tours, a shop, café, lunchtime jazz and world music in the Café Consort and a free exhibition series.

Kensington Palace
As one of central London’s most famous royal residences, Kensington Palace has been a home and refuge to the royal family since the 17th century. At the moment it's the official residence to the Duke and Duchess of Cambridge – otherwise known more familiarly as Kate and Wills. Built in 1605, it has roots in Jacobean architecture and was first known as Nottingham House. Now Princess Diana's former home is one of London’s most exquisite palaces and comes with acres of manicured gardens and the world famous Orangery.

Natural History Museum
Hundreds of exciting, interactive exhibits come to life in one of London’s most beautiful landmark buildings. Highlights include the popular Dinosaurs gallery, the Mammals display with the unforgettable and vast model blue whale and the spectacular Central Hall, home to the Museum’s iconic Diplodocus skeleton.

The Roof Gardens
Although a restaurant, clubbing and event venue, the extraordinary Kensington Roof Gardens are still accessible to the general public during the day if there are no functions taking place (ring to check before your visit). The gardens are divided up into three distinct areas; traditional English, formal Spanish and Tudor. The English garden, with its wild woodland theme, appears the most extraordinary, considering its position on top of an office block. Over 100 trees (all of which are under a preservation order), a stream and garden pond with flamingos and ducks combine to create a magical environment that defies its unique elevation. Fountains, vines and palm trees define the Moorish idyll, while the Tudor garden provides a delicate contrast with roses, wisteria, ivy and leafy arches. This really is one of London's secret treasures and worth the small effort required to arrange a visit.

What to do in Kensington

Listed below are some of the great places to visit in Kensington. Click one to find out more. 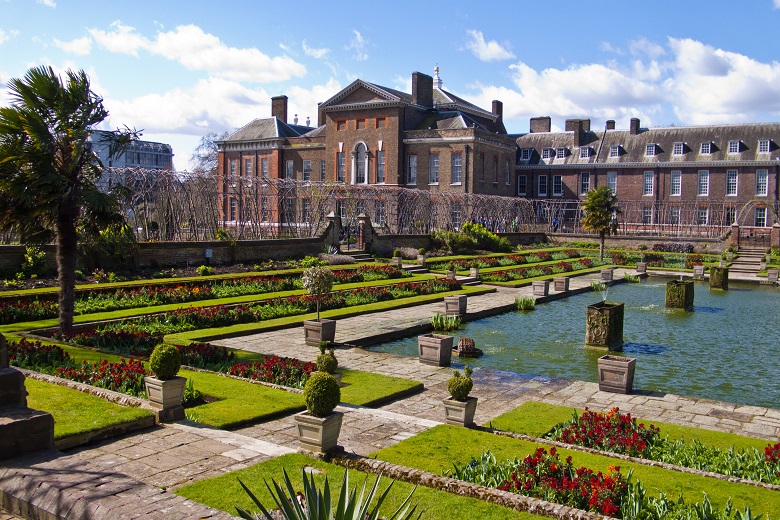 Great for families, tourists and millions of Londoners alike, Kensington Gardens, one of the capital's eight Royal Parks, is also one of the most visited with the popular attractions of Kensington Palace, the Italian Garden, the Albert Memorial, the Peter Pan Statue and the Serpentine Gallery all being located within its 242 acres.

Planted with formal avenues of magnificent trees and ornamental flower beds, the gardens are also home to the popular Diana, Princess of Wales Memorial Playground which is a fantastic adventure playground for kids up to the age of 12. Over 750,000 parents and children enjoy the area each year.

The Gardens are particularly popular for sunbathing and picnics in the summer, and all year round as a healthy walking route to work for commuters. Casual joggers and runners abound and cycling is also allowed on the path linking the Queen's Gate to West Carriage Drive, Mount Gate to the Broadwalk and on the Broadwalk itself from Black Lion Gate to the Palace Gate.

The Orangery Restaurant, located next to Kensington Palace, is a lovely location for lunch or an indulgent afternoon tea. Offering a selection of teas, wines and champagnes and an outside terrace, you'll be able to enjoy great views of the palace and its beautiful gardens from these elegant confines.

Hyde Park and The Serpentine Lake 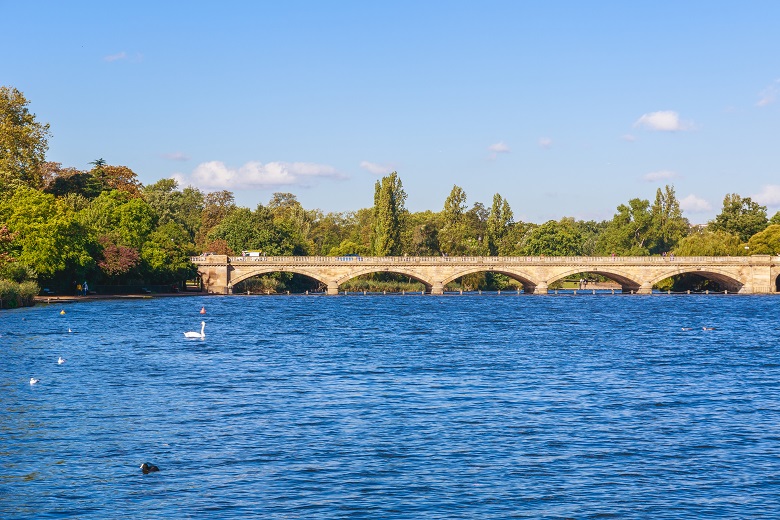 Hyde Park's 350 acres are home to a number of very famous landmarks including the Serpentine Lake, Speakers' Corner and the Diana, Princess of Wales Memorial Fountain. This amazing space offers a host of activities including open water swimming, boating, cycling, tennis and horse riding. The Serpentine Lido and its paddling pool are great for adults and kids while alongside the Lido is the Lido Cafe Bar which is a great place to enjoy a bite to eat or indeed a richly deserved glass of wine or pint of beer. The fearless swimmers of the Serpentine Swimming Club take to the water every day between 6 and 9:30 in the morning and even more impressively during the famously freezing race on Christmas day!

Kensington's fabulous Roof Gardens are spectacular and unique and best of all, they're open to the public to visit free of charge!

The gardens were completed in 1938 and amazingly there are actually three themed gardens sprawling over 1.5 acres and including fully grown oaks and fruit trees! Everything grows in just 1.5m of soil, and there's also a flowing stream stocked with fish and wildlife.

The Spanish Garden is based on the Alhambra in Granada, Spain. The Tudor Garden is filled with evergreen shrubs surrounded by fragrant lilies, roses and lavender in the summer months, and finally there is The English Woodland garden which is at its best in the spring months, when thousands of narcissus, crocus, muscari and anemones burst into life. Meet the resident flamingos including Bill and Ben and Splosh and Pecks.

The gardens are often hired for private events so we suggest that you phone ahead (on 0207 937 7994) to make sure that they're open on your preferred day. If however, the gardens are in use, you could always book a table in Babylon Restaurant on the 7th floor for amazing views of London's skyline, or just take a cocktail on the terrace.

From 1875, 18 Stafford Terrace was the home of Punch cartoonist Edward Linley Sambourne and his family and servants. The beautifully preserved house gives a rare and personal insight into the lives of the Sambourne's and their 'Aesthetic interior'. The Aesthetic Movement advocated the use of foreign or 'exotic' influences in the decoration of the home and this can be seen by the various Japanese, Middle-Eastern and Chinese objects throughout the home. This lovely, historic Victorian town house was opened to the public in1980. We recommend booking to avoid the many school and guided tours that pass through.

The second of our historic Victorian Houses, Leighton House is the former home of artist Frederic, Lord Leighton. The only purpose-built studio-house open to the public in the United Kingdom, it is one of the most remarkable buildings of the nineteenth century, containing a fascinating collection of paintings and sculpture by Leighton and his contemporaries. From modest beginnings the house grew into a ‘private palace of art' and includes the extraordinary Arab Hall with its golden dome, intricate mosaics and walls lined with beautiful Islamic tiles. Many of the most prominent figures of the Victorian age were entertained in Leighton's studio including Queen Victoria in 1859.

Leighton House Museum is today surrounded by other studio-houses, occupied during the second half of the nineteenth century by artists of the Holland Park Circle. This group provides a unique insight into the wealth, status and taste of successful artists in the late-Victorian period.

Ken High Street as its colloquially known, is a lively, buzzy shopping opportunity positively teeming with the well heeled out making their latest acquisitions, whether it be fashion items, high end travel or outdoor adventure gear. The boutiques of the adjacent Kensington Church Street are generally slightly less crowded but no less chic or expensive!

The Whole Foods Market is probably the largest mainly organic food shop in the country, and has an extensive market restaurant upstairs. There are also numerous antiques shops in Kensington Church Street going up the hill towards Notting Hill. These sell everything from Victorian paintings to Art Deco pieces and Oriental porcelain. There are of course, the requisite number of good coffee shops, pubs and eateries needed to meet the shoppers needs, and a large Marks and Spencer's store from which to make that emergency underwear purchase...

You may want to combine shopping with a trip to one of our other attractions such as nearby Kensington Palace, the Royal Albert Hall, Leighton House Museum or the Linley Sambourne Home. If you like people-spotting then there are several record companies based here including that of Simon Cowell, so it's a great spot for checking out those new boybands - and once in a while you may even see proper musicians.

The heritage bus (route 9H) runs from Kensington High Street to Trafalgar Square every 20 minutes from 9:30am until about 6:30pm, Monday-Sunday using the old Routemaster vehicles (the iconic doubledecker London bus).

Our featured apartments in Kensington Guide