German bombing during the Second World War caused massive damage to the historic docks with 380,000 tons of timber destroyed in the Surrey Docks in a single night. Then when the shipping industry invented containers in the 1960's it finally meant the end of a great era for the old docks. Efforts to redevelop the docks began almost as soon as they were closed and a massive development programme during the 80's and 90's saw the Docklands converted into a mixture of residential, commercial and light industrial spaces. The clearest symbol of the whole effort was the ambitious Canary Wharf project that constructed Britain's tallest building and established a second major financial centre in London.

The construction of both the Docklands Light Railway (DLR), which connected the Docklands with the City, and of London City Airport, contributed to the area becoming a major business centre as well as a great area in which to live. Canary Wharf has become one of Europe's biggest clusters of skyscrapers and a direct challenge to the financial dominance of the City while the renewal of the Docklands has also had a major effect in reviving nearby Greenwich. The apartments at Canary Riverside offer great value in this remarkable location.

The Museum of London's Docklands is just a 5 minute walk to the west of Canary Wharf. It documents the history of the River Thames and London's docks and it's located in a 19th century warehouse on West India Quay which is an old working dock. Refreshments are available nearby - the rest of the warehouses on the dock have been converted into restaurants and bars.

Further to the west of Canary Wharf beyond the Museum of London Docklands is the area of Limehouse which can be explored from Westferry DLR Station. There you'll find the maritime church of St Anne's Limehouse, designed by Nicholas Hawksmoor in the 18th century and Grade I listed. It flies the White Ensign from its flagpole (a flag normally only flown by the Royal Navy) and has the highest church clock in London. Beyond St Anne's is the Limehouse Basin which is the starting point for walks along the Regent's Canal and the Limehouse Cut Canal.

Even further to the west you can alight at Tower Gateway DLR Station and visit Tower Bridge and the Tower of London.

Museum of London - Docklands
The Museum of London Docklands is located in the old Georgian warehouses on the north wharf of West India Docks, the Isle of Dog's last multi-story warehouses from that period. The Museum explores the story of London's river, port and people from Roman times to the recent regeneration of the Docklands, and its many galleries feature fun, hands-on displays targeted at children.

Greenwich Park
The 183-acre Greenwich Park was laid out for Charles II to a design by Louis XIV's landscape gardener. The oldest of London's eight Royal Parks (it can trace its roots back to 1427), Greenwich Park contains many beautiful gardens and walking paths. Contained within the grounds, visitors will find the Wilderness with its wildlife, as well as the Old Royal Observatory and the Prime Meridian Line. The views toward the city and the River Thames are wonderful, particularly at sunset (don't be in a hurry after the public address system announces the park's closure - instead, take the longest route back down to the river). Adjacent to the park is the Ranger's House, home to the Wernher Collection with its displays of jewelry, glassware, silver and paintings.

Canary Wharf
The highlight of the Isle of Dogs is Canary Wharf, the most ambitious development in the Docklands. This self-contained mini-city covers 69 acres and consists of a multitude of towers for financial institutions, with Canary Wharf Tower being the tallest. The area is interesting to stroll around and contains many cafés and restaurants, as well as Island Gardens Park, a pleasant three-acre waterfront green space. The views of the Cutty Sark and the National Maritime Museum along with Greenwich Park are phenomenal, and a unique pedestrian tunnel under the Thames can take you there in just a few minutes.

St Katherine's Docks
St Katharine's Docks, once considered a slum, is now one of the hippest areas of London's revitalized East End and has managed to keep much of its original character. Old warehouses were converted to dwellings; the Dock Master's residence, the Dickens Inn and the Ivory House - originally a store for ivory constructed in an Italian style - were all renovated. New buildings are concealed behind old facades, and a food market was recently started. St Katharine's Dock is ideally located beside Tower Bridge, the Tower of London and Tobacco Dock and makes a perfect place to get away from the crowds as part of a fun riverside.

Royal Observatory
The Royal Observatory, founded in 1675 by Charles II to promote safer navigation, was housed in Flamsteed House - designed for the purpose by Sir Christopher Wren. Then in 1967, it moved to Herstmonceux in Sussex. Today, Flamsteed House contains a collection of old astronomical instruments in the Astronomy Centre. On a mast topping one of the towers is a red time ball that drops at 1pm every day, a device originally intended to enable vessels in the river to regulate their chronometers. The zero meridian of longitude, dividing the world into eastern and western halves, runs through the Meridian Building, and is marked by a steel rod in the floor. A huge dome dominates the Equatorial Building, which houses Britain's largest telescope and the excellent Peter Harrison Planetarium.

Things to do in Docklands

Listed below are some of the great places to visit in Docklands. Click one to find out more. 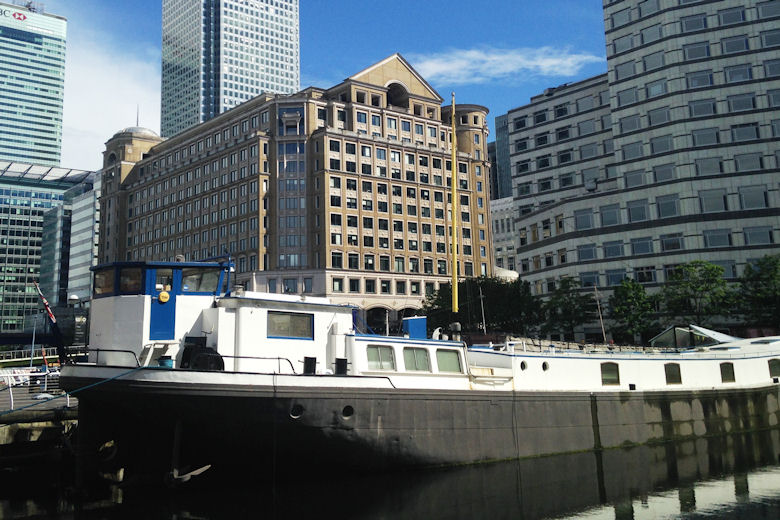 Modern day Docklands, and Canary Wharf in particular, are seen by some as temples to money and greed, but if you find you've had enough of earthly pleasures and want to get more in touch with your spiritual side, why not visit St Peter's Barge, London's only floating church, located in the heart of Canary Wharf!

This old Dutch barge was refitted in the Netherlands and brought across the North Sea under its own power in the summer of 2003 and it now has a permanent mooring at the heart of Canary Wharf in West India Quay. 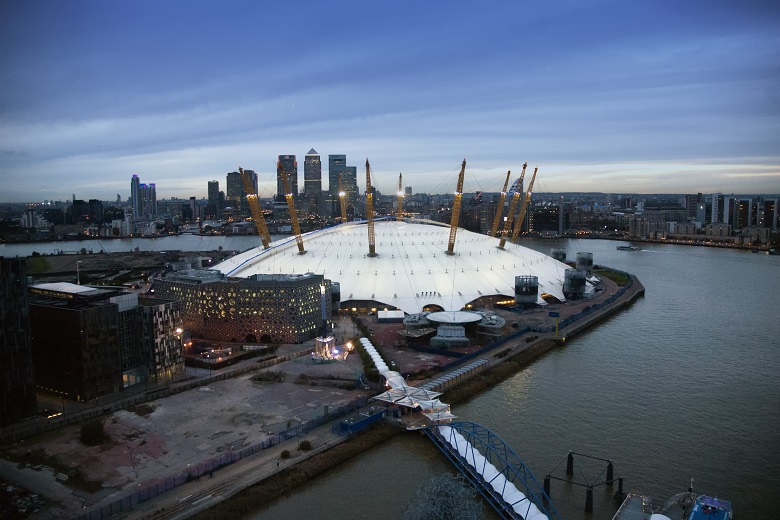 After an inauspicious start to life, the former Millennium Dome has been transformed into one of London's hottest entertainment venues.

The central arena at The O2 has great sight lines from every angle, crystal clear acoustics & comfy seating.  Some of the world's hottest and most sought after acts have played here: Beyonce, Bon Jovi, Justin Timberlake, Scissor Sisters, Prince, The Rolling Stones, Elton John, Take That and many more. The O2 arena also hosts major sporting events throughout the year including the ATP Tennis finals.

In addition there is the 11 screen multiplex cinema where the main auditoriam has the biggest screen in London, the 02 Bubble exhibition hall, the Indi02 for those who appreciate their live music in a more intimate environment and even if you don't have tickets to a specific event, the Entertainment Avenue surrounding the arena is packed with restaurants, bars & clubs, so it's the ideal place to go out with your family or just hang out with mates.

Our featured apartments in Docklands Guide