Interestingly, the name of Bayswater is derived from a corruption of Bayard’s Watering Place and it was first recorded as being so in 1380, however it was stigmatised by wealthy London residents for being on the wrong side of Hyde Park! Typical. Like a lot of London areas that surround mainline stations, Bayswater spent much of the 20th century in decline, with rows of decaying houses either being split up into nasty bedsits or used as cheap hotels of all shapes and sizes. The huge influx of Arab, American, Jewish and Brazilian populations into the area however, along with a series of government grants, has helped Bayswater to tidy itself up very nicely and transform itself into the now pretty, cosmopolitan area of London that it is today.

And it's thanks to that diverse population that you’ll find Bayswater's  unique multi-ethnic vibrancy and colourfulness very rewarding. Interspersed amongst the large houses and now often very upmarket range of hotels, you’ll find plenty of great attractions to visit. The area additionally boasts an exquisite (and exotic) cultural melting pot of restaurants, most of which are to be found on Westbourne Grove, where the most reputable organic supermarket in Britain is also handily located. The very interesting Porchester Baths are renowned for their steam rooms and the vast Whiteleys building is home to a host of high street shops and cafes as well as to a multi-screen cinema.

Bayswater is largely a residential area but there are a lot of great places to stay and you’re within shouting distance of many of London’s most sought after areas. You’re near to fab Knightsbridge and the very high end shopping experiences available there, as well as being close to Hyde Park and the wonders of that lovely green space and of course there’s a lot of restaurant fare for you to enjoy nearby!

Bayswater Top 5 'Must Not Be Missed'

Portobello Market and Notting Hill
Head to the famous Portobello Road Market for everything from antiques and vintage clothing and accessories to street food and fresh veg stalls. While away the time strolling down the length of the market taking a peek at the myriad of vintage clocks, continuing on for your freshly baked bread and locally produced vegetables before grabbing some great bargains at the big second-hand booksellers market at the end of the road. If you find the market just too busy, why not sidle down one of the many little side streets and take a look around cutesey neighbour Notting Hill spending some substantial amounts of cash in one of the many very high end designer boutiques in that area!

Hyde Park, Kensington Gardens and Italian Fountains
If the weather allows, make absolutely sure to head down towards two of the most sparkling jewels in London's vast armoury of green spaces, Kensington Gardens and Hyde Park, and sit down for a minute or two beside the stunningly beautiful Italian Garden. The Italian Garden is a 150 year old ornamental water garden located on the north side of Kensington Gardens near to Lancaster Gate. It's believed to have been created as a gift from Prince Albert to his beloved Queen Victoria, and what a choice it was. Once you're ready to use your tired legs again, amble down on one of the sides of the brilliantly sinuous Serpentine, the small lake in the middle of the park, making sure to check out the statue of Peter Pan before eventually maybe stopping for a coffee and oven baked pizza at the Serpentine Bar & Kitchen! And of course, don't forget to check out the great and the good (and the just plain loony) at Speaker's Corner.

Westfield
Westfield London is a vast and pioneering shopping and leisure destination in which to shop, to eat and to meet. Find Debenhams, Next, Marks and Spencer, House of Fraser, Waitrose and over 265 other luxury, premium and high street retailers from more than 15 different countries within the architecturally stunning centre.

Bayswater Road Sunday Art Exhibition
Every Sunday, Bayswater Road in W2 is transformed into the world's liveliest open-air art show. With sidewalk art being shown at its (sometimes dubious) best, this world famous show on the railings of Kensington Gardens is licensed by Westminster City Council. Over 150 artists and craftsmen display their own original works - and you can meet the artists and choose from thousands of different exhibits. There are oil paintings, acrylics, watercolours, drawings and pastels; in fact pictures in every medium, size and subject from contemporary abstracts and traditional landscapes to the tiniest miniature flower paintings. The Princess Diana Memorial Garden, the Peter Pan statue, the Italian Garden, the Serpentine and world famous Oxford Street shops are all nearby too once you've made your purchase.

Little Venice
Little Venice is a very quaint and scenic part of London, known for its canals and the array of multicoloured boats and barges moored just north of Paddington station. From here you can either take a boat trip or follow the tow path on foot and see how the winding waterway snakes its way through the heart of the city. You can head downstream past the charming regency streets of Maida Vale and on to Regent’s Park and Camden beyond, or follow this peaceful corridor upstream to the west and enjoy the tranquillity of the waterways that feel like a million miles from the hubbub of the roads and streets nearby.

What to do in Bayswater

Listed below are some of the great places to visit in Bayswater. Click one to find out more. 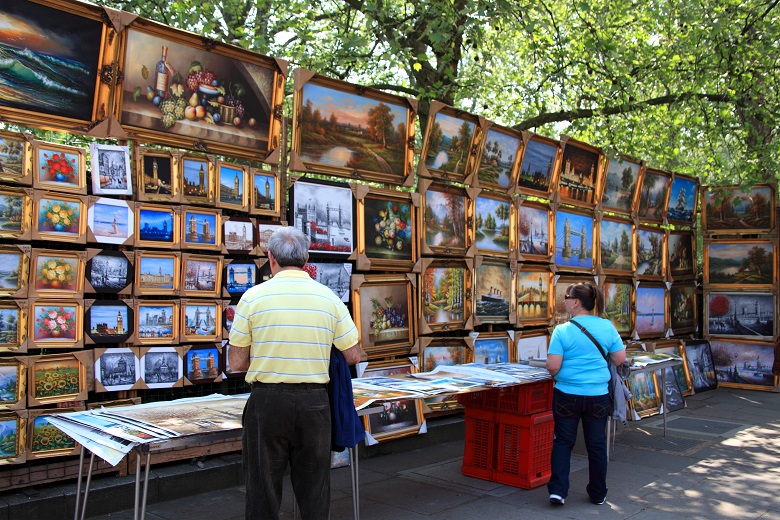 The Bayswater Road art market runs on Sunday mornings and is a great place to not only pick up a picture, but also experience an authentic piece of London life first hand. You'll find thousands of paintings of varying degrees of quality lined up against the black metal railings on the Park side of the road, and some inviting pubs and eateries on the left, so you can retreat there for sustenance and to consider the wisdom of your purchase.

The well known landmark of Whiteleys shopping centre with its beautifully ornate facade, contains a large number of shops and eateries including big brands like Marks & Spencer, HMV & Starbucks. There is also an Odeon cinema and bowling alley. Restaurants Rowley Leigh and Le Café Anglais and a new food hall operated by renowned restaurateur Dominic Ford in the central mall area add to the allure. Called 'Food Inc' the food hall sells fresh fish, meat, dry goods, wine and meat from the shopping centre's own farm. Recently a new vintage store, Victory Vintage, opened on the first floor opposite the GAP. One of the largest retail spaces on the first floor is Toys-R-Us while other stores include Zara, French Connection and 'The Real China'. 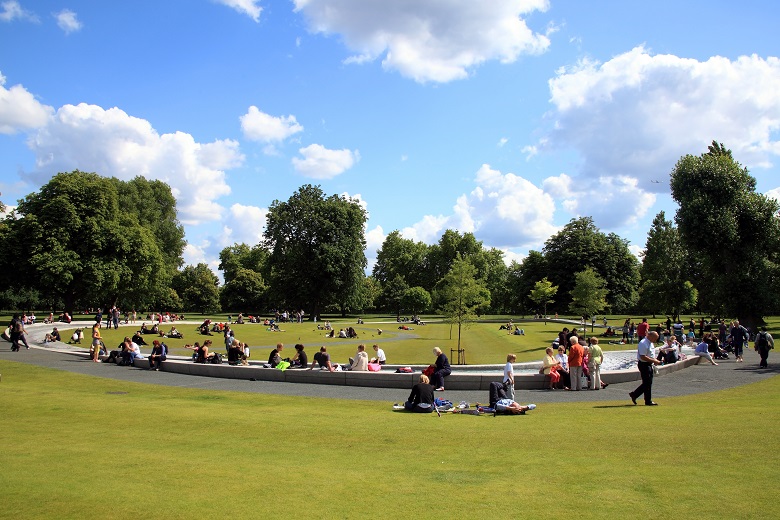 This children's wonderland opened on the 30th June 2000, in memory of the late Princess Diana. Located next to her Kensington Palace home, a huge wooden pirate ship is the amazing centrepiece of this fitting tribute to the Princess who loved the innocence of childhood.

The design has created an area where less able and able-bodied children can play together and inspired by the stories of Peter Pan, the playground encourages children to explore and follow their imaginations, learning whilst they play. Over 70,000 children enjoy this free playground each year, playing, exploring, dashing about, and letting their imaginations soar in this magical space. There is a sensory trail, teepees, a beach around the pirate ship and various toys and play sculptures; all set against a lush backdrop of trees and plants. There's also plenty of seating so the grownups can relax too! 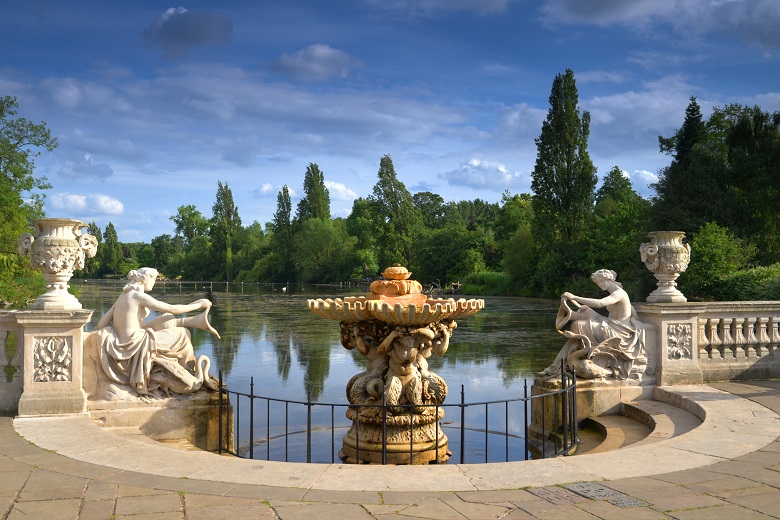 The beautiful Italian Garden fountains in Kensington Gardens have featured in some very successful modern movies. Regular visitors to the Gardens will have seen some of the biggest names in Hollywood at work here, including Johnny Depp, Kate Winslet, Helena Bonham Carter and Renee Zellweger. Kensington Gardens is a star location in Bridget Jones: The Edge of Reason, and it's where Mark Darcy (Colin Firth) ends his famous fist fight with love rival Daniel Cleaver (Hugh Grant). Their brawl over Bridget (Renee Zellweger) starts at The Serpentine Gallery and ends up as an epic battle in the central basin of the Italian Garden!

The Italian Garden also features in Wimbledon (2004), the romantic comedy starring Kirsten Dunst and Paul Bettany, but it's a star London attraction in it's own right.

Our featured apartments in Bayswater Guide